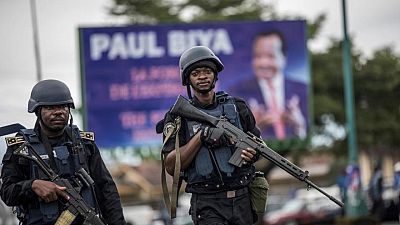 Nine people were injured on Sunday in the blast of an artisanal bomb in a Yaoundé bar, the government announced on Monday.

It was the fourth in a series of attacks of this kind in less than five months in the Cameroonian capital.

No one claimed responsibility for the attack. In a press release published 24 hours after the explosition, the Communication ministry did not mention any potential suspect.

Cameroon has been the scene of a bloody conflict between security forces and separatist rebels in the country's western English-speaking areas. In the north, many deadly attacks have been led by the jihadist group Boko Haram.

The "improvised explosive engine, hidden in a bag" was activated "remotely" with a homemade device "made with a motor battery, a memory card and electric wires", the ministry added.

The attack happened on Sunday evening in a snack bar in the Nsma area, in central Yaoundé.

Nine clients of the bar were wounded, the ministry's press release said, adding that none had life-threatening injuries. "Some of the injured left the hospital that same night", a police officer told the AFP.

A hospital source told the AFP that two women were among the victims, one of which was released early, while the other is still resting at the hospital.

This is the fourth bomb placed in Yaoundé in just over five months. In July, four people were injured when a bomb went off and two other relatively minor attacks were reported in June.

The capital has so far been shielded from the two bloody conflicts affecting Cameroon.

In the North-west and the South-west, the clashes opposing separatists and the army, which has been ongoing for three years, has already caused 3,000 deaths and forced 700,000 people to flee their homes.

In the north, jihadist group Boko Haram terrorises locals. The group was founded in Nigeria and is now active in neighbouring countries Cameroon, Chad and Niger.