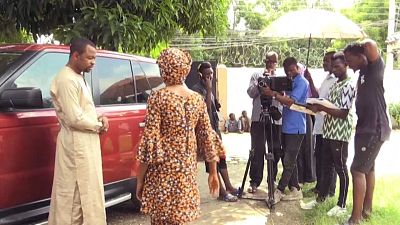 The lockdown, which saw businesses around the world shut down, was a boon for Northflix as idle Nigerians turned to their mobile phones to stream their favourite movies.

At just 1,500 naira ($4) a month, Northflix, its online platform has seen subscribers double and revenue triple since lockdowns

Since springing up in 1992 with just seven production companies, the industry has grown to include 502 production outfits and 97 editing studios.

It now employs more than 30,000 people, according to the Kano chapter of the Motion Pictures Practitioners Association of Nigeria.

While Kannywood films have the same themes of love, revenge and betrayal as those churned out by the prolific Nollywood film industry in the predominantly Christian south, the content must adhere to strict Islamic rules.

Northflix, the Kannywood's fledgling online streaming platform, has seen its client base soar since authorities imposed lockdowns to contain the coronavirus pandemic in March.

Its subscriber base of 40,000 has nearly doubled, while revenue has tripled, CEO and co-founder Jamil Abdussalam told the press.

"Coronavirus has been a blessing to us business-wise, despite the disruptions it has caused to the global economy," he said.

"It was not by chance, but a result of a conscious and concerted business strategy".

Kabiru Sufi, a Kano-based economist who follows trends in Kannywood, attributed the success of streaming platforms to their astute business sense and technology.

Abdussalam said Northflix formerly used the pay-per-view system but quickly switched to flat-rate subscriptions after the virus emerged in Asia and Europe, knowing that it "would reach all corners of the world".

The fee is just 1,500 naira ($4) a month in addition to subscribers' smartphone and internet costs.

The lockdown, which saw cinemas, hotels, bars and other recreational outlets shut down, was a boon for Northflix as idle Nigerians turned to their mobile phones to stream their favourite movies.

That opportunity also came as producers were desperately seeking an alternative market for their films with cinemas and DVD stores shuttered.