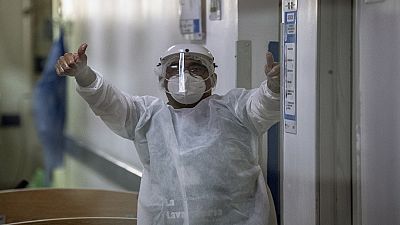 Researchers in England say they have the first evidence that a drug can improve COVID-19 survival: A cheap, widely available steroid reduced deaths by up to one third in severely ill hospitalized patients.

The results were announced Tuesday and the British government immediately authorized the drug’s use across the United Kingdom for coronavirus patients like those who did well in the study.

Researchers said they would publish results soon, and several independent experts said it’s important to see details to know how much of a difference the drug might make and for whom.

The study, led by the University of Oxford, was a large, strict test that randomly assigned 2,104 patients to get the drug, dexamethasone, and compared them with 4,321 patients getting only usual care.

The drug was given either orally or through an IV for 10 days. After four weeks, it had reduced deaths by 35% in patients who needed treatment with breathing machines and by 20% in those only needing supplemental oxygen. It did not appear to help less ill patients.

Researchers estimated that the drug would prevent one death for every eight patients treated while on breathing machines and one for every 25 patients on extra oxygen alone.

“There’s this distinction, if you like, between the early phase and the later phase. What we’re seeing today is for patients who need oxygen, for patients who need machines to help them breathe. Those patients, their chances of survival will be improved if they took dexamethasone,” said Dr. Martin Landray, one of the study leaders from the University of Oxford.

Many hospitals and doctors have been trying steroids to quell the immune system, but there’s been no evidence from high-quality studies that it helps for COVID-19.

Until now, the only drug shown to help is remdesivir, an experimental drug from Gilead Sciences that blocks an enzyme the virus uses to copy its genetic material.

Remdesivir shortened the time to recovery for severely ill hospitalized patients by 31% to 11 days on average versus 15 days for those just given usual care, in a study led by the U.S. National Institutes of Health.

No information was given on side effects, but researchers said they used a low dose and for a short time, which is generally safe.

“The side effects of corticosteroids are quite well known, for example, with people with diabetes that can increase blood sugar levels a little bit. But of course, in the context of a very sick patients with really quite a high chance of dying without the treatment, the benefits in terms of reducing the risk of dying vastly outweigh the possible side effects,” Landray said.

The Oxford study is the same one that earlier this month showed the malaria drug hydroxychloroquine was not working against the coronavirus.

The study enrolled more than 11,000 patients in England, Scotland, Wales and Northern Ireland who were given either standard of care or that plus one of several treatments: dexamethasone; the HIV combo drug lopinavir-ritonavir; the antibiotic azithromycin; the anti-inflammatory drug tocilizumab; or plasma from people who have recovered from COVID-19 that contains antibodies to fight the virus.

Research is continuing on the other treatments. The research is funded by government health agencies in the United Kingdom and private donors including the Bill and Melinda Gates Foundation.

The Associated Press Health and Science Department receives support from the Howard Hughes Medical Institute’s Department of Science Education. The AP is solely responsible for all content.