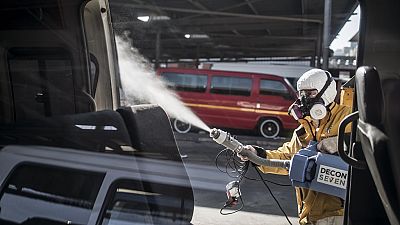 Strict measures adopted by South Africa to curb COVID-19 continues to bite entrepreneurs. Fino Dlamini, started her business only in 2019 to offer bicycle tours of Soweto to visitors. But now, her tools are idle.

“So I started this business officially last year October and I bought and invested in equipment. That equipment included bicycles which were part of the product that I was offering”, she said.

One of the plans is to turn this space into a butchery, which is a service that is essential...

“One of the plans is to turn this space into a butchery, which is a service that is essential and that I feel the people around this area will probably need the supply of meat. So I’m exploring that idea”, Dlamini added.

Millions of South Africans share in the same misfortune as Dlamini. Francois Venter, infectious diseases expert and University of Witwatersrand professor says some decisions taken by the government failed to protect businesses.

“Some of the decisions haven’t made sense, so I think that there is a grumpiness on the part of the population where government has just made decisions and hasn’t explained them very well. And in some of the cases they really don’t make sense. But in other cases I think there is a desire to slowly open the economy without suddenly having this surge of infections”, the Professor said.

The Southern African nation began to ease restrictions on May 1, allowing selected mines, factories and businesses to reopen with up to 30 employees.The unemployment rate was at a staggering 29 percent even before the outbreak of the coronavirus.