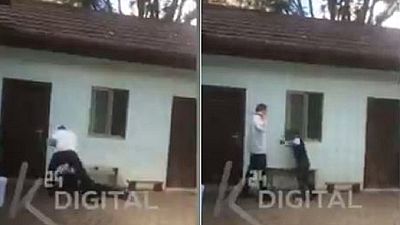 A Kenyan TV station on Saturday broadcast a video that showed a Chinese man caning a Kenyan in an open compound. K24 Digital describing the footage as “disturbing” said it was an exclusive clip of the Chinese meting punishment to a late employee.

The video was “showing a senior Chinese hotel officer whipping a Kenyan waiter over allegations of reporting late to work. The video was recorded at Chez Wou Restaurant in Kileleshwa, Nairobi last week,” the channel added.

The said worker is seen being instructed to lean on a table whiles the took turns to flog him without showing mercy to the expressions of pain and writhing by the unnamed employee.

On Sunday, the police Directorate of Criminal Investigations, DCI, acknowledged the incident by quoting the K24 tweet and said it had dispatched detectives to probe the video and circumstances surrounding it.

Their findings revealed that the aggressor was indeed a Chinese national by name Deng Hailan, a chef, who was an illegal economic migrant because he was working without the necessary documents.

“Yu Ling, a cashier at the hotel holding a visitor’s visa but without a work permit was also arrested. Eight Kenyans who work at the hotel were also escorted to Kilimani Police Station for further interrogation,” a DCI post on Twitter read.

Meanwhile on Monday, the quartet were arraigned before a court which ordered that they be kept in custody for three days as investigations continue into Saturday’s incident.

For their part, the Chinese embassy in Kenya said it was in the know of the video but that it “supports” investigations that are underway.

“We support the Kenyan police to investigate the whole issue thoroughly according to Kenyan laws. Whoever violating the law will face the legal consequences,” their tweet read in part.

Following reports of an incident doing rounds in sections of the press depicting a man of Asian descent assaulting a male employee said to be working at a hotel, this morning detectives from Kilimani raided Chez Wou Restaurant in Kileleshwa in pursuit of the matter. https://t.co/1Cjo0BHTGs