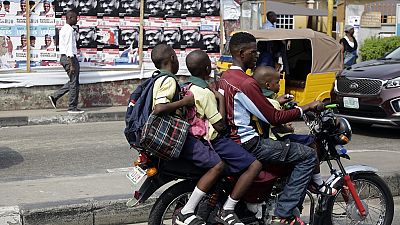 A section of Nigerians are not enthused at a motorbike ban in parts of the commercial capital, Lagos. Today is the first weekday of the ban announced by the Lagos State government. It came into effect last Saturday.

Most people used social media platform Twitter to chastise the government despite a plan to roll out more buses and ferries to ease the expected transportation woes.

Operators of motorbikes popularly referred to as “okada” and tricycle taxis known as “keke napeps” had strongly kicked against the move since it was announced last week.

Our youths no longer learn the trades we used to be proud about of - tailoring, bricklaying, printing, painting and others. Now we get artisans from neighbouring countries.

In effort to minimise the impact of the #Okadaban on Lagos commuters Lagos Bus Services Limited will be expanding its operations from Monday 3 Feb, 2020 to the following routes:

We will also be increasing capacity on our existing routes. #ForAGreaterLagos pic.twitter.com/pKpsmSW6rf

#Okadaban is trending on Twitter as people share their perspectives on the ban. Some are looking at the public policy angle, whiles others are making mockery of the impact with yet many others reporting incidents of defiance by lone riders.

Lagos is Nigeria’s largest city and a hotbed for economic activities. The state government defended its move stressing that the ban was needed because of deaths and disorderliness caused by motorbike and motorised tricycle taxis.

The ban is currently being enforced on all major highways and bridges. City official Gbenga Omotoso disclosed last week that motorbikes will not be allowed in specific areas of the city: Ikeja, Lagos Mainland, Lagos Island, Apapa, Surulere and Eti Osa.

A statement from the state on late last week said the ban was partially to motivate young men to find better jobs instead of shuttling people on motorbikes for a fee.

“Our youths no longer learn the trades we used to be proud about of – tailoring, bricklaying, printing, painting and others. Now we get artisans from neighbouring countries,” it said in part.

With the Lagos #OkadaBan, we appear, as usual, to have gone for the option that involved the least thought & planning from a public policy perspective. If you are introducing 65 buses & 14 new ferries from tomorrow, introduce them first and watch it work before announcing a ban.

How Lagosians look when they leave home this morning vs when they arrive at work #OkadaBan : pic.twitter.com/yMBjZ7URHz

Sanwo Eko Wants all of us to be fit… A governor I double Stan ??? #OkadaBan pic.twitter.com/V5ssqSrrgR

Some People Said The Keke & #OkadaBan Will Reduce Traffic In Lagos.
Dear Lagosians
Abeg What Is This I Am Seeing On Third Mainland Bridge?
Go Slow? pic.twitter.com/55WiOhoaCS

7. Loss of Jobs due to lateness and Absenteeism
8. Increase in transportation cost.
9. Increase in Health complications for the aged.
10. Increase in School drop outs.