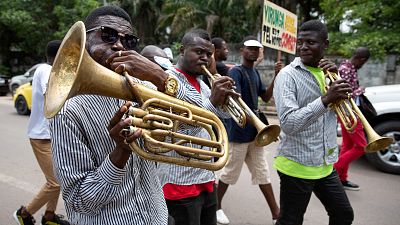 More than 200 people in Kinshasa, Democratic Republic of Congo joined the global call for urgent action on climate change on Friday.

Greenpeace Africa and civil society groups focussed their protest on the clearing of the Congo Basin’s forests for industrial agriculture which they say will have a devastating effect on the climate.

Thousands of people worldwide rallied to demand more action on climate change, aiming to force political leaders to come up with urgent solutions at a United Nations climate conference next week in Madrid.

Swedish activist Greta Thunberg had been due to join a student strike in Lisbon, but her environmentally friendly voyage across the Atlantic from New York by yacht was hit by high winds, delaying her by a few days, she told social media followers.