Namibia's presidential, national assembly polls: All you need to know 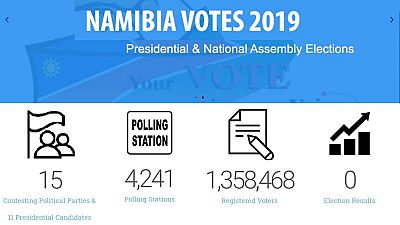 Namibians go to the polls on November 27, 2019; to vote in presidential and National Assembly elections. It will be the sixth election since independence from apartheid South Africa in 1990.

Even though the presidential race is the most keenly watched, there are also 96 seats in the National Assembly to be contested. Incumbent President Hage Geingob is the country’s third president and is looking to secure a second term.

The organizing body is the Electoral Commission of Namibia, ECN, Its chairperson is Advocate Notemba Tipueja with the secretariat currently led by Theo Mujoro, the Chief Electoral and Referenda Officer.

Namibia uses a majority system for presidential elections, in which the candidate with more than 50% of votes is declared the winner.

A look at the key figures involved

Among the nine challengers to president Geingob is a member of his own SWAPO party, dentist Panduleni Itula, who is running as an independent. It is not known the extent to which this could affect SWAPO but analysts see very little impact.

A faltering economy, one of the worst droughts in living memory and the biggest corruption scandal in Namibia’s history have dented the SWAPO government’s popularity among its over 1.3 million registered voters.

In the run up to the votes, a corruption scandal concerning an Icelandic fishing firm caused two ministers to resign their posts.

Justice Minister Sackeus Shanghala and Fisheries and Marine Resources Minister Bernhard Esau resigned after media reports alleged that they had awarded horse mackerel quotas to Iceland’s biggest fishing firm Samherji in exchange for bribes. Arrests have since been made.

SWAPO will be looking to protect its political history of having won all elections in independent Namibia. Any big losses will count as victory for the opposition seeking to deplete the government’s fortunes.

Regional and international observers have largely declared Namibia’s past elections as fair and credible, although the use of voting machines may test whether they can stay that way.