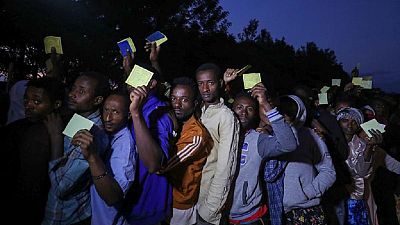 Ethiopian Prime Minister Abiy Ahmed on Thursday congratulated voters who cast ballots in a referendum held in the country’s south.

The vote is to determine the statehood of the Sidama people currently located in the Southern Nations and Nationalities and Peoples’ Region, SNNPR.

“Congratulations to citizens and institutions involved in holding a peaceful and democratic referendum for Sidama statehood. The voting process is demonstrative of our capacity for taking our differences to the ballot and allowing democratic processes to prevail,” Abiy’s office posted on Twitter.

Over two million people were on the voter register for the exercise as the Sidama Zone – as it is now, moves to become Ethiopia’s tenth regional state within the federal structure.

The referendum is expected to be approved by a large margin following which the Sidama ethnic group, who make up about 4% of the country’s population, will control local taxes, education, security and laws.

Analysts have cautioned about the likelihood of other ethnic groups to make similar statehood demands following this vote.

Ethiopia’s nine regional states enjoy a level of autonomy where they are able to choose their official language and have limited powers over taxation, education, health and land administration.