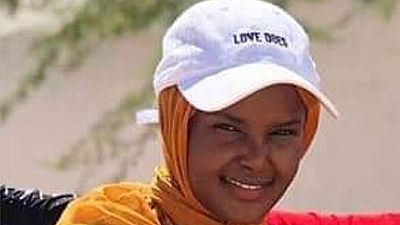 A prominent civil society activist and former Somali diplomat was shot and killed in a suburb of the capital Mogadishu on Wednesday.

Reports said Almaas Elwan was pregnant at the time of the incident and was heading to the airport to board a flight to the Kenyan capital Nairobi.

“The circumstances under which the Almaas was killed remained unclear but sources said a bullet ripped through a vehicle she was. Sources said she was heading to the airport from the airforce Hangar in Halane,” the local news portal Hiiraan reported.

Almaas had served at the Somali Embassy in Kenya between 2016 and 2017. She is sister to Nobel nominee Ilwaad and Somali National Army’s Lieutenant Col. Iman Elman.

Her father who was killed in 1996 in Mogadishu founded a peace foundation of which her sister currently heads. The deceased had been actively involved in Elman Peace foundation.

Her sister Ilwad Elman who was this year tipped for the 2019 Nobel peace prize, which award was eventually given to Ethiopian Prime Minister Abiy Ahmed Ali.

Many people on social media have expressed shock at the development whiles expressing condolences with the bereaved’s family.

Multiple sources now confirm that Almaas Elman, a civil society activist and former diplomat at Somali embassy in Kenya was killed as a result of gunshots in Halane area. She was a young rising leader; deepest condolences to her mother Fartun, her sister IlwadElman and fireinds.