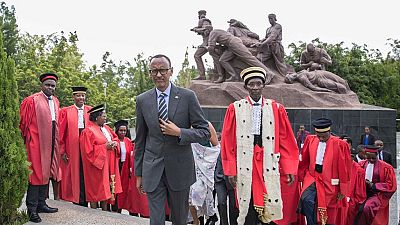 The Rwandan government on Wednesday reacted to a petition from some British lawmakers urging president Paul Kagame to release two former military officers from prison.

In a letter signed by the Minister of justice / Attorney General, Busingye Johnston; for a case that was still in the courts, the request for release if entertained would signal executive interference in matters of an independent judiciary.

The letter addressed to Baroness D’Souza and copied to the other petitioners read in part: “As a matter of Rwandan law, there are limited circumstances in which the government can intervene in a criminal case.

“Unless and until invited to do so in accordance with the relevant laws and procedures, it would be inappropriate for the executive to comment on any pending case, seek to influence the outcome or intervene as proposed in your letter. Any such action will constitute undue interference in an independent judicial process.

It further added that the detainees were entitled to pursue the option of clemency as per relevant laws. The two, Frank Rusagara – who was once a defence attaché to the UK – and Tom Byabagamba, were arrested five years ago.

A military court sentenced them to 20 and 21 years in prison respectively on charges of spreading rumours and tarnishing the image of Rwanda and its government.

The UK lawmakers had described the sentences as disproportionate and asked that with deteriorating health of the duo, President Kagame should release them on compassionate grounds.

#Rwanda‘s Minister of Justice and and Attorney General, BusingyeJohns replies to British members of Parliament;