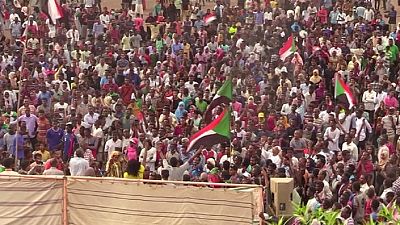 Thousands of demonstrators took to the streets across Sudan on Monday to call for disbanding former President Omar al-Bashir’s party, the political organ he used to control the country during his 30 years rule before being ousted in April.

The protests in Khartoum and other parts of the country coincided with the anniversary of an uprising in 1964. That push ended six years of military rule in Sudan following a wave of riots and strikes.

Sudan’s current transitional government came to power after a similar campaign of mass unrest, which eventually led the military to overthrow al-Bashir. The country is now ruled by a joint military-civilian administration, which must navigate a delicate path toward eventual democratic elections in just over three years.

There were no reports of any clashes with police or casualties during Monday’s protests. The marches renewed demands for independent investigation into the deadly break-up of a protest camp by security forces in June.

Police blocked off main streets Monday leading to the presidential palace and the military’s headquarters in Khartoum — the site of June’s deadly dispersal — said Asil Abdu, an activist.

A statement by the police warned against “creating a state of chaos,” which it said could lead to “unfavorable consequences.”

Videos circulated online showed protesters marching in the capital and other cities such as Atbara, a northern transport hub where the uprising began in December.

The appointment of Hamdok, a respected economist, as Sudan’s top civilian leader in August helped lessen fears the military would attempt to cling to power.

Last week, he sacked several top bureaucrats, which pleased protest leaders who want the remnants of al-Bashir’s regime purged from all state institutions.