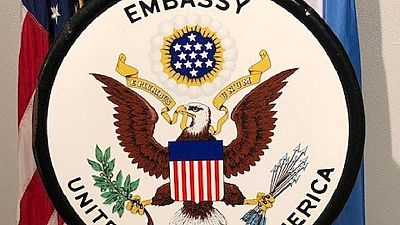 The United States re-opened its embassy in Somalia’s capital Mogadishu, nearly three decades after it was shut down, underscoring deepening ties between the two nations amid persisting threats from Islamist group al Shabaab.

Somalia, in the Horn of Africa, has been gripped by widespread lawlessness and violence since 1991 when autocrat Mohamed Siad Barre was toppled by various warlords.

The United States closed its embassy in January 1991.

It is a significant and historic day that reflects Somalia’s progress in recent years.

In a statement the U.S. embassy to Somalia said the move was a milestone in the strengthening of relations between the two countries and would help advance stability and development in Somalia.

“It is a significant and historic day that reflects Somalia’s progress in recent years,” the U.S. ambassador to Somalia, Donald Yamamoto, was quoted as saying.

The embassy, he said, would act “to enhance cooperation, advance U.S. national strategic interests, and support our overall security, political, and economic development.”

The re-opening of the embassy builds on the re-establishment of a permanent U.S. diplomatic presence in Mogadishu last year.

This development comes hardly a week after Somalia’s opened its first permanent embassy building in the US capital, Washington.

We are truly proud to see our SomaliEmbDC in Washington, hosted in a Federal Republic of Somalia owned building! It is the first time since independence! We will extend these efforts to our embassies elsewhere until we restore and cement our nation's place in global affairs. pic.twitter.com/fpojbXNgIK