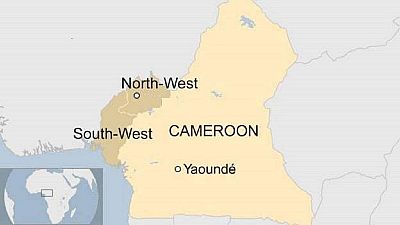 It’s back to school day in Cameroon’s economic capital Douala and 19-year-old Pricilla Ngum Che is getting ready to go to class — for the first time in two years.

Pricilla lives in this small windowless room, that she shares with her two younger siblings.

She and her siblings live by themselves and are supported by their parents who sends them money to tend to their other needs.

With only their clothe on their backs, Pricilla and her brothers fled their home town of Kumba, the second largest English speaking city in Cameroon, were separatist have been fighting to establish a breakaway state.

Cameroon has been gripped by violence since November 2016, when government forces crushed a movement of Anglophone teachers and lawyers protesting against their perceived marginalization by the country’s French-speaking majority.

The protests morphed into an insurgency of separatists seeking independence for the Anglophone southwest and northwest regions, which were controlled by Britain during colonialism.

The deteriorating security has led to the closure of hundreds of schools and left thousands of children like Pricilla without no access to education, leading many families to move to French speaking towns so that their children could go to school.

Pricilla attends a private English college 20 minutes away form her home, which also has other displaced children who fled because of the crisis.

School administrator Ali Ousmalia says the influx of displaced children presents many challenges for the school authorities, and that the number of children coming from troubled Anglophone region has more than tripled this school year.

“The population that we are having that is really disturbing us now as I may say, It is all these our brothers and sisters from the north west (anglophones). Disturbing us in how? They are disturbing us that they come they don’t have documents to prove they were in school, they come they don’t have their birth certificate, they don’t have their report cards, so it is really heavy on us. Some are even coming… as you can see if you move in to classes now… we are forced to take them in class without uniforms, without any information like that just to make sure we educate Cameroonians,” he added.

Political blogger Tah Javis Mai has had a devastating impact on the education system in Cameroon’s anglophone region and its children.

“We have about 20 percent of effective resumption for North and South West regions. We have 600.000 kids out of school. We have 4000 schools down, either burned down or not open at all. Now we are talking about a school resumption especially where I come from, an area where we use to have 5000 students per school in GBHS Muea is shutdown. Looking at the other surrounding schools but come now to look at the effects. It’s going to create an increase in hate crime because we have kids who have not been able to school 3 years going to 4 years now all of them are in the bushes. Now their mentality now is different. They now see things differently,” he said.

For Pricilla, readjusting to school in a new town has not been easy, especially after missing out on two years of school, away from family and friends.

“I face a lot of challenges inn school in the fact that, my teachers back in south west, where stopped. So, I have come here so they are not in the same page with us, yeah. So, I face lots of challenges for that and it’s very difficult for me to pick up here. And then secondly, I face challenges in school… I don’t have friends. Am just there bored, alone, I don’t have anyone to talk to. Yes, so am very-very lonely in school,” she added.

Cameroon’s President Paul Biya announced in a rare public address last Tuesday the organization of a national dialogue to solve a separatist crisis in the country’s English-speaking regions.

Biya said the talks, led by the prime minister and starting from the end of September, would bring together a wide range of people to seek ways to end violence that has plagued the region in recent months.

In June, NGO Human Rights Watch said the prospects for talks between the government and separatist leaders were very thin.