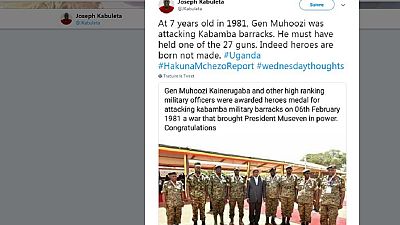 Ugandans have taken to social media to call out the authorities including the police and President Yoweri Museveni, following the arrest of a journalist who is accused of insulting the head of state.

Joseph Kabuleta, an ex-journalist who police describes as a ‘self-styled pastor’ was arrested on Friday evening, and charged with ‘offensive communication against the person of the president’.

Police accuses Kabuleta, who previously worked with the leading newspaper in the country, the New Vision, of referring to the president as ‘a Gamber, Thief and Liar’ in a Facebook post.

The joint forces will continue using the acquired capabilities to monitor comments on social media and any offenders will be investigated and punished.

‘‘We once again want to caution all those who glorify such communication particularly through social media, that though it is public space, it is not protected,’‘ read part of the police statement.

‘‘Therefore, any postings of false fabrications will attract punishment in accordance with the laws. The joint forces will continue using the acquired capabilities to monitor comments on social media and any offenders will be investigated and punished.’‘

Stella Nyanzi, a prominent academician and activist, has been in jail since November last year, and is facing trial over charges of cyber harassment and offensive communication against the president.

She is accused of insulting the president’s dead mother in a Facebook post, on the day the 74-year-old Museveni was celebrating his birthday.

Several Ugandans including prominent opposition politicians, journalists and activists have condemned the arrest of Kabuleta, describing it as intimidation and proof that Museveni’s government is intolerant of criticism.

The arrest of Joseph Kabuleta for “offending the president” is archaic, intolerable and unacceptable! Ugandans have every right to offend the president. They hire him to serve them. They should be free to express their anger at how he is running the country justifiably or not!

Am a ready witness for Joseph Kabuleta, if his case comes to court. Let all other witnesses get ready.PoliceUg pic.twitter.com/wYxZB0mKYI

Annoying and offending the president: Stella Nyanzi was “too obscene” in her poem, music promoter Andrew Mukasa aka Bajjo was “very unpolished” in his Youtube threats and now Pastor Joseph Kabuleta “too acidic” in his Facebook postings pic.twitter.com/qSxCaOm6nQ

Where can we send all the evidence of lies, theft by Museveni? We are ready to expose the tasteless lies and rampant theft.

And so like that, Joseph Kabuleta, former journalist, was kidnapped & taken into custody over facebook posts that are offensive to President Museveni. Calling him a gambler, thief and liar! Apparent move to silence all critics- esp those bold enough to expose his evil schemes. pic.twitter.com/7sTenuDLym

Many observers believe Kabuleta is being harassed for his commentary on the so-called ‘Muhoozi Project’ that is reportedly grooming Museveni’s son Muhoozi Kainerugaba to become the country’s next leader.

It's nice to see that Muhoozi's bevy of well-paid promoters are finally earning their dimes. They must be on a mega payroll to believe that someone as dull and lifeless as him can be president. Museveni would have to put us all to sleep before that happens. Mutubalemu ku magezi.

ALSO READ: Is Uganda’s Museveni grooming his son to be Commander-in-Chief?