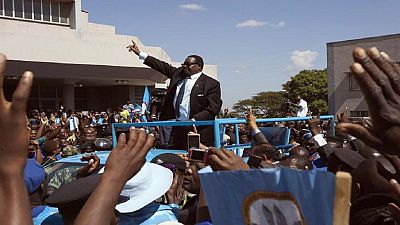 Malawi’s outgoing President, Peter Mutharika, 78, takes another shot at extending his political career on Tuesday in an uncertain presidential election, where he will face an opposition leader and two members of his own government.

6.8 million voters of the poor and agricultural southern African country, which is highly dependent on international aid, will also elect their MPs and local councillors on the same day.

Peter Mutharika, who has been in power since 2014, is running for a second term against seven other candidates.

His presidency has been tarnished by corruption cases, despite his commitment to fight this scourge. He was personally involved in a $3.9 million bribe case.

He first stated that he was “convinced that it was an honest donation”, before being forced to repay $200,000.

“Malawi has been put on the road to progress,” he said Saturday at his last election rally in Blantyre in front of thousands of his supporters. “If you give me another five years, I will transform this country to the point that you will not recognize it… We will reach the level of Singapore or Malaysia,” he said.

Infrastructure, including roads, has improved over the past five years, but the outgoing economic balance sheet remains mixed. Since 2014, inflation rate has fallen from 23 to 9%, but growth has fallen from 5.7% to 4%, according to the International Monetary Fund (IMF).

Mutharika’s main opponents on Tuesday – his Vice-President Saulos Chilima, his Minister of Health Atupele Muluzi and opposition leader Lazarus Chakwera – naturally made the fight against corruption one of their main campaign arguments.

Saulos Chilima, who last year slammed the door of the ruling Democratic People’s Party (DPP) while retaining his position as vice-president, accuses the outgoing President of “corruption” and “nepotism”.

“We are witnessing a serious plundering of public resources, which are intended to improve the quality of life,” he told AFP. “The people in power…knew exactly what to do, but they did the exact opposite.”

“We must put an end to corruption and enforce the rule of law,” he told AFP. “People are ready for change (…) We will win this election,” added the man who came second in the 2014 presidential election.

His supporters believe that he will win.
“I want the country to return to what it was during the Kamuzu era, things were then much better,” Scholastica Blackson, a peanut farmer, told AFP.

In 2019, half of Malawi’s 18 million people still live below the poverty line and only 11% of its population has access to electricity.