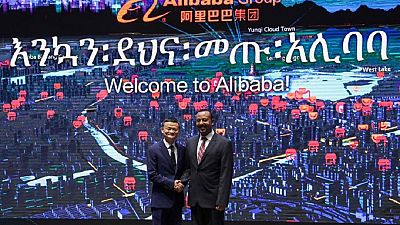 <p>Ethiopia Prime Minister Abiy Ahmed continued his engagements in China where he is attending the Belt and Road Forum that started on Thursday.</p> <p>A major highlight of Abiy’s second day was his visit to the headquarters of global e-commerce group, Alibaba, in Hangzhou.</p> <p>He met with the group <span class="caps">CEO</span>, Jack Ma, the second meeting between the two in as many months. Abiy and Ma first met during the World Economic Forum, <span class="caps">WEF</span>, held in Davos earlier this year.</p> <p>“Jack Ma expressed he has been inspired by the reforms that have been undertaken, confirming that Ethiopia is now a key strategic partner which he will visit this year,” the PM’s office confirmed in a social media post.</p> <blockquote class="twitter-tweet" data-lang="en"><p lang="en" dir="ltr">PM Abiy Ahmed visited the headquarters of e-commerce giant Alibaba, in Hangzhou. Following up on their meeting in Davos, PM Abiy & <a href="https://twitter.com/AlibabaGroup?ref_src=twsrc%5Etfw"><code>AlibabaGroup</a> Chairman Jack Ma shared that this visit is a reflection of a friendship geared towards supporting Ethiopia’s dev’t. 1/2 <a href="https://t.co/zb1TW83AJM">pic.twitter.com/zb1TW83AJM</a></p>— Office of the Prime Minister - Ethiopia (</code>PMEthiopia) <a href="https://twitter.com/PMEthiopia/status/1121368748009644034?ref_src=twsrc%5Etfw">April 25, 2019</a></blockquote> <script async src="https://platform.twitter.com/widgets.js" charset="utf-8"></script> <p>Abiy also met with the Communist Party Secretary of Zhèjiāng province, Che Jun. His office noted that private enterprises from the province were currently operating in Ethiopia. Abiy also rallied for more investments in the newly opened up sectors of the Ethiopian economy.</p> <p>Earlier on Wednesday, Abiy held multiple diplomatic and business meetings with partners. He met separately with Chinese president Xi Jinping and with counterpart Prime Minister Li Keqiang.</p> <p>On the sidelines, he met with major business outfits with interest in Ethiopia’s infrastructure space, amongst them, China Export and Credit Insurance Corporation (Sinosure) and State Grid Corporation of China.</p> <iframe src="https://www.facebook.com/plugins/post.php?href=https%3A%2F%2Fwww.facebook.com%2Fafricanews.channel%2Fposts%2F2330036780393489&width=500" width="500" height="507" style="border:none;overflow:hidden" scrolling="no" frameborder="0" allowTransparency="true" allow="encrypted-media"></iframe>