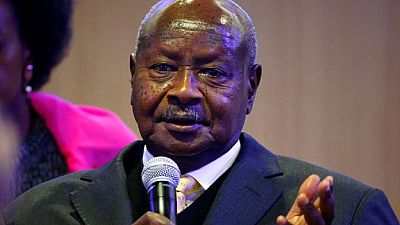 Uganda said Tuesday some suspects had been arrested in connection with last week’s kidnap of an American tourist and her tour guide in a national park.

In a statement on Tuesday, police said: “The joint security team actively investigating the kidnapping incident … has made some arrests of suspects, on suspicion of being involved.”

Police did not give details about the suspects but said they had been detained during “raids and extensive searches” in Kanungu district, more than 400 km (250 miles) southwest of the capital Kampala.

The operation to rescue the tourist is still ongoing.

In a tweet on Monday, U.S. President Donald Trump urged Ugandan authorities to find the perpetrators and bring them to justice “openly and quickly”.

“Whatever these people (kidnappers) demanded for was paid,” Ssubi said.

“The money had to be taken … everything was done to save the lives of these people.”

Ugandan security officials had earlier refused to acknowledge the payment despite several reports in local and international media.

The United States has maintained it follows a policy of no concessions to kidnappers although the tour firm that arranged the safari told Reuters the captives were released after a “negotiated settlement” with the assistance of the US government.

US president, Donald Trump has tasked Ugandan authorities to find ‘the kidnappers of the American Tourist and guide’.

‘‘Bring them to justice openly and quickly!’‘ the president tweeted on Monday, adding that it is the only way ‘people will feel safe going there’.

Uganda Police also issued a statement on Monday, reassuring visitors to Uganda of safety, while at the same time sharing the latest updates on the hunt for the criminals.

‘‘The operation to arrest the culprits is ongoing with the close coordination of our counterparts from the DRC, whom we have been working with for the last 5 days,’‘ read part of the police statement.

The statement did not address the reports that a ransom was paid to secure the release of the victims, rather explaining that ‘specific details on how the rescue mission’ cannot be released for tactical reasons.

‘‘The victim who had been held captive together with her safari guide, Jean Paul Mirenge, were released because of the implicit threat of the use of force, after the armed captors, knew they were being pursued.’‘

US President Donald Trump, in a tweet, confirmed the news of Endicott’s released.

“Pleased to report that the American tourist and tour guide that were abducted in Uganda have been released. God bless them and their families!” Trump tweeted

Ugandan President Yoweri Museveni on Monday insisted his country was safe for travellers, after the kidnapping of a US tourist, but vowed to further strengthen security in national parks.

“Uganda is safe,” Museveni wrote on Twitter, adding that authorities would “deal with these isolated pockets of criminals” and “continue to improve security in our parks”.

“Come and enjoy the Pearl of Africa,” he said.

Government spokesman Ofwono Opondo wrote on Twitter that Endicott and Mirenge, were rescued “by Uganda security forces in the DRC”.

He added that “the kidnappers have escaped and operations continue”.

On Sunday, Ugandan authorities confirmed that the American tourist, Kimberley Sue Endecott, 35, and her Ugandan driver, Jean Paul, had been successfully rescued recovered safe and sound after a ransom was paid for their release.

“Ransom paid and people exchanged,” he told AFP by text, adding that he didn’t know the “precise amount yet”.

Police had said the kidnappers used Endicott’s mobile telephone to demand a ransom of $500,000 (445,000 euros) for the release of the pair.

Asked about the ransom, police spokeswoman Polly Namaye would not confirm directly but referred AFP to the tour company, saying it was “an authority on its own”.

She credited the safe recovery of the pair “to the untiring efforts” of the search teams who were drawn from the police, military and the wildlife authority.

“The victims of last week’s kidnapping have been recovered alive,” Namaye said.

Ugandan security forces scoured dense bush on Thursday in the hunt for a US tourist and her safari guide who were kidnapped by gunmen in a national park.

Army spokesman Brigadier Richard Karemire said security forces were doing all they could to track down the gunmen.

“Let the security forces do their work,” he said Thursday.

The US Embassy in Kampala said it was aware of the kidnapping, and warned its citizens to “exercise caution when travelling to this area due to ongoing security activity.”

Soldiers have fanned out along the porous border with the Democratic Republic of Congo, with security forces insisting they believe the pair remain in the country.

Meanwhile, he country’s wildlife authority said on Thursday the kidnapped tourist had failed to take an armed ranger as required by the park’s regulations.

“We have armed ranger guides, if you’re going out on a drive in the park you’re supposed to have one but these tourists went out on their own without a guard,” Bashir Hangi, spokesman for the state-run Uganda Wildlife Authority (UWA), told Reuters.

“From their camp in the park, they just got into a vehicle and went out. They should have notified us and informed us that they’re going out for a game drive and then we would have availed them a guard but they didn’t do this.”

California-based Endecott and the couple entered Uganda on March 29 and flew the next day to the park in the country’s southwest, the spokesman added.

Ugandan authorities on Wednesday launched an extensive rescue operation for an American woman and her driver who were kidnapped at Uganda’s most popular wildlife park.

The statement added that an elite unit of the Tourism Police had been dispatched to actively pursue the kidnappers and succesfully recover the victims.

“The joint security teams have cut off all exit areas on the border between Uganda and the DRC in search of the victims,” the statement added, warning the group may still be in the park.

Police said the kidnapping appeared financially motivated, since the group quickly made a demand of $500,000 (Shs1.9b) using Endecott’s mobile.

The police was quick to reassure any tourists planning to visit the national park, saying the kidnapping was an isolated case. ‘‘Strengthened safety measures have been put in place for both the local residents and visitors.’‘

The park, Uganda’s most visited, is located about 400 km (250 miles) southwest of the capital Kampala, near the border with the Democratic Republic of Congo (DRC), which is home to many fragmented rebel groups.

The Somali Islamist militant group al Shabaab has carried out attacks in Uganda in the past, but has never been known to kidnap anyone for ransom there.

In 1999, an American couple, four Britons and two New Zealanders were killed along with four Ugandan guides when their group was ambushed by gunmen in the Bwindi Impenetrable National Park. Survivors said the killers appeared to be Congo-based Hutu rebels.

Bwindi begins about 20 km (12 miles) south of Queen Elizabeth National Park, where tourists flock to see lions, hippos, crocodiles, chimpanzees and other African wildlife in an area of lakes, savannah, forests and swamps.

Tourism is a key industry for Uganda, as a major earner of foreign currency. Hundreds of thousands of tourists visit each year. Uganda is home to over half of the world’s endangered mountain gorillas.