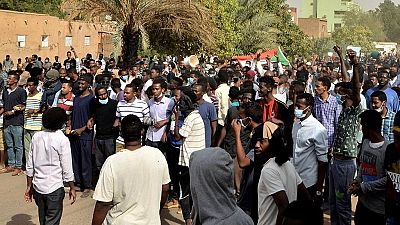 Sudan’s security forces have killed at least 60 people in more than three months of street protests, an international rights group said Friday as dozens of Sudanese took part in anti-government protests in the capital, Khartoum, and other cities.

The protests erupted in December, initially over a failing economy, but later transformed into demands for the resignation of the autocratic al-Bashir, an Islamist who has run the country for nearly 30 years but brought little improvement to his people.

Disproportionate and excessive use of tear gas, rubber bullets, and live ammunition by security forces are critically injuring Sudanese citizens who are exercising their legal right to peaceful demonstration, causing serious long-term health risks and, in some cases, even death.

Security forces have responded with a fierce crackdown, using tear gas, rubber bullets, live ammunition and batons to quell the unrest. An estimated 2,000 protesters have also been wounded, including many shot in the eye with birdshot and some losing limbs from live ammunition, according to rights groups and activists who spoke on condition of anonymity for fear of reprisals.

The government has said that 31 people have been killed but hasn’t updated its tally in weeks.

The rights group said it documented uniformed and plain-clothed forces from the National Intelligence and Security Services pulling civilians out of their homes in Khartoum and beating many others with batons and dragging them to vans. The forces also fired live ammunition at protesters in at least three districts of Khartoum, Physicians for Human Rights said.

There was no immediate comment from authorities on the report and a government spokesman did not respond to requests for comment.

In its 24-page report, the New York-based watchdog said the Sudanese government forces’ targeting of the country’s health-care infrastructure and the torture of detainees, including doctors, have increased the impact of the violence on the health of civilians and threatened the Sudanese people’s right to access health care.

The group quoted an unnamed Sudanese doctor who, it said, witnessed attacks on medical personnel, as saying that “when they (security forces) arrest anyone, they ask what they do. If you say doctor, or if they find out that you are … then you are arrested at least for one month. When they got arrested, they usually undergo solitary detention and psychological abuse.”

“Disproportionate and excessive use of tear gas, rubber bullets, and live ammunition by security forces are critically injuring Sudanese citizens who are exercising their legal right to peaceful demonstration, causing serious long-term health risks and, in some cases, even death,” said Rohini J. Haar, a medical expert at Physicians for Human Rights.

The group called attacks on doctors and medical facilities an “egregious violation of human rights.”

Dozens of protests, meanwhile, poured into the streets of Khartoum and elsewhere in the country to press al-Bashir to step down, according to organizers of the protests.

Footage posted online showed dozens of people marching in Khartoum and its twin city of Omdurman after Friday prayers and chanting: “Freedom, dignity and justice.” The also chanted “The people want the fall of the regime,” echoing the popular slogan of the 2011 Arab Spring uprisings that briefly defied despotism in the region, but never made it to Sudan.

The rallies were called by the Sudanese Professionals Association, which has been spearheading the demonstration. The group also called for marches on Saturday, the 34th anniversary of the overthrow of President Jaafar al-Nimeiri in a bloodless coup in 1985.

Nimeiri was removed by the military after a popular uprising. The military quickly handed power to an elected government. The dysfunctional administration lasted only a few years until al-Bashir — a career army officer — allied with Islamist hard-liners and toppled it in a coup.