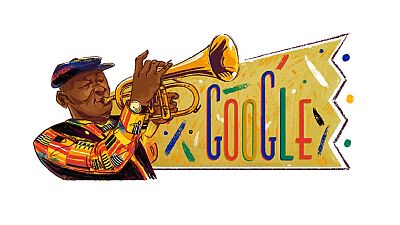 The celebration is in respect of what would have been his 80th birthday. A photo of a brightly dressed Masekela blowing his trumpet appears on the doodle home page.

Often tagged as the father of South African jazz, his exploits went beyond music into politics and activism. Some of his most popular tracks were employed during the apartheid struggle.

His classic, Grazing In The Grass, topped the Billboard Hot 100. He was the first African male Grammy nominee (1968). Amongst others, he won the Lifetime Achievement Award at the CHOMVA, Ghana Music Awards, Jazz FM Awards and MAMAs.

“Born 80 years ago today in the coal-mining town of Witbank, South Africa, Masakela got his first horn at age 14. He went on to play with a wildly popular group known as the Jazz Epistles, the first all-black jazz band to record an album in South African history.

“However, within the year, its members were forced out of the country by the apartheid government.”

Masekela died in early 2018 in Johannesburg at the age of 78. According to his family, he died after a protracted fight against cancer. The celebrated jazz musician was born on April 4, 1939.

“It is with profound sorrow that the family of Ramapolo Hugh Masekela announce his passing. After a protracted and courageous battle with prostrate cancer, he passed peacefully in Johannesburg, South Africa, surrounded by his family.

“A loving father, brother, grandfather and friend, our hearts beat with profound loss. Hugh’s global and activist contribution and participation in the areas of music, theatre, and the arts in general is contained in the minds and memory of millions across 6 continents …

“… and we are blessed and grateful to be part of a life and ever-expanding legacy of love, sharing and vanguard creativity that spans the time and space of 6 decades. Rest in power beloved, you are forever in our hearts,” the family statement read.