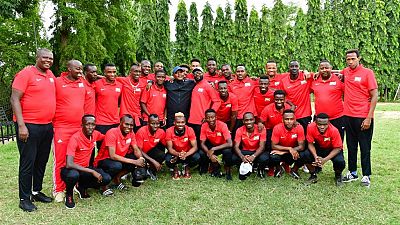 South Africa became the 24th and last country to qualify for the 2019 Africa Cup of Nations after a 2-1 win over Libya in Sfax, Tunisia on Sunday. Along with Zimbabwe, the Democratic Republic of Congo, Tanzania and Benin, the Bafana Bafana swept up the five remaining spots for the finals in Egypt on the last day of the qualifying campaign.

Zimbabwe edged the Republic of Congo 2-0 in Harare to top Group G while DR Congo beat Liberia 1-0 in Kinshasa to secure second spot.

President Felix Tshisekedi was among thousands of fans who cheered on the national team as they wrapped up a difficult qualifying campaign.

Tanzania beat Uganda in Dar es Salaam 3-0 to qualify as Group L runners up. Uganda had already qualified with a game to spare.

Earlier on Saturday, Burundians partied late into the night as they celebrated their country’s historic qualification to the Africa Cup of Nations.

Burundi drew 1-1 with Gabon in Bujumbura to finish second in Group C and secured a spot in the Nations Cup finals for the first time in their history. Mali topped the group.

Burundi make History .. For the 1st time ever ????#AFCON2019Q pic.twitter.com/q6IXSohTUj

Cedric Amissi scored in the 76th minute as Burundi, who only needed a draw to qualify, looked to have sealed their place at Egypt 2019.

Burundi joins fellow East Africans Uganda and Kenya at the finals in Cairo.

Gabon’s Arsenal striker Aubameyang had a largely quiet afternoon and they were unable to get the second goal they needed to reach the finals.

Celebrations in Burundi .. What a Historical Moments pic.twitter.com/ZpEk1IDrmn