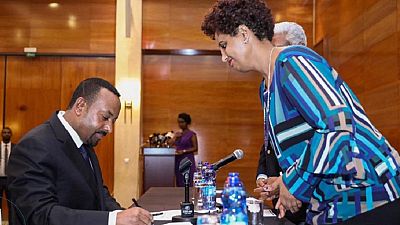 Competing political parties in Ethiopia on Thursday signed a peace pact as part of democratic efforts as the country gears towards crucial polls slated for 2020.

Reports indicate that over 100 parties were signatories to the code of conduct document at an event held in the capital Addis Ababa.

Prime Minister Abiy Ahmed signed the document on behalf of the ruling coalition, the Ethiopian Peoples Revolutionary Democratic Front, EPRDF. He described the occasion as a democratic milestone.

“Describing the day as a historic and unique one that has bound more than 100 parties in common understanding, he called upon all to treat the document as one that guides the actions of all.

“He also called upon law and security enforcement entities to serve all parties equally. In concluding, PM Abiy Ahmed called upon all to be custodians of peace and unity in our current moment,” the PM’s office said in social media posts.

The new elections chief, Birtukan Mideksa and other officials were present at the event. Appointed in 2018, Mideksa and her team are tasked with organizing highly expected 2020 polls.

Abiy has in the past held talks with opposition parties and spoken about his determination to ensure the polls are free, fair and credible. He has stated explicitly that he will respect the will of the people after the vote.

Political and security watchers have emphasized the importance of credible polls in current reforms. The two other key planks being security and the economy.

Abiy will chalk a year in office in April 2019 but his reform footprints have been engraved in a country that was on the brink of implosion at the time he took office.

All political parties signed a code of conduct today. PM Abiy Ahmed signed the doc on behalf of EPRDF. The signing of this code of conduct by all, further confirms the opening up of the political space in Ethiopia, & gov’t commitment to ensure fair, free and inclusive elections. pic.twitter.com/EtVlEVHQfr