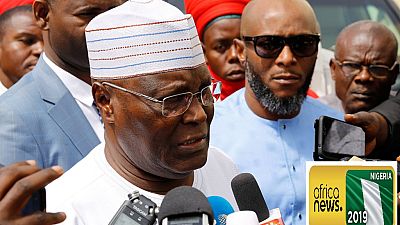 In its meeting with stakeholders on Saturday, INEC explained that delays in transporting electoral material were the reason behind the poll extension.

INEC chairman Mahmood Yakubu insisted that the commission was not under any external pressure to postpone the vote.

Yakubu also said an audit would be conducted since some sensitive election material had been distributed but had since been returned to the central bank.

In the northeastern city of Maiduguri, people gathered for morning prayers after which they had planned to vote.

“We are disappointed and deeply pained by the postponement of the election. We spent our all night without sleeping hoping to vote today and just hearing the news that the election was been postponed,” said one worshipper, Auwolu Usman.

Kabiru Sale, 27, who sells oil in the northern city of Kano, said the move took him by surprise.

The chairman of the main opposition People’s Democratic Party (PDP), Uche Secondu, said the move was “dangerous to our democracy and unacceptable”.

He said it was part of an attempt by Buhari to “cling on to power even when it’s obvious to him that Nigerians want him out”.

Buhari’s ruling All Progressives Congress (APC) party also criticised the electoral commission for the delay. The president had cooperated fully with the commission to ensure it had everything it had demanded to conduct free and fair elections, it said in a statement.

President Muhammadu Buhari on Saturday expressed disappointment and dismay over the postponement of the polls, saying INEC repeatedly assured the political stakeholders of its readiness to conduct polls.

‘‘This administration has ensured that we do not interfere in any way with the work of INEC except to ensure that all funds were released to the commission,’‘ Buhari said in a statement.

We now urge INEC to ensure not only that materials already distributed are safe and do not get into wrong hands, but that everything is done to avoid the lapses that resulted in this unfortunate postponement, and ensure a free and fair election on the rescheduled dates.

The president, who said he is travelling to Abuja for the INEC meeting with candidates and political parties, urged Nigerians to remain calm and refrain from civil disobedience.

Buhari and Atiku had travelled to the northern states of Katsina and Adamawa to cast their votes.

Atiku urges supporters to be patient

Nigeria’s opposition leader, Atiku Abubakar appealed to voters to be patient, following the electoral commision’s decision to delay the vote until Feb. 23.

“I’m appealing to Nigerians to please come out and vote and I’m asking them to be patient about it,” he said.

He later said Buhari’s administration was behind the delayed elections, without offering any evidence.

“By instigating this postponement, the Buhari administration hopes to disenfranchise the Nigerian electorate in order to ensure that turnout is low on the rescheduled date,” he said on Twitter.

Nigerians must frustrate their plans by coming out in even greater numbers on Saturday, 23 February and Saturday, 9 March respectively.

Africanews’ journalists, Jerry Bambi and Brigette Ugwe, are in Lagos, Nigeria’s commercial capital where they are engaging voters to share their reactions and thoughts on the election postponement.

A registered voter in Falomo Under bridge Ikoyi, Lagos told our journalists that he had come as early as 6am to this polling unit and was disappointed over the postponement which he says has gulped a lot of tax payers monies.

Maxwell , a registered voter in Falomo Under bridge Ikoyi Lagos, had come as early as 6am to this polling unit.

He is disappointed over the postponement which he says has cost the taxpayer a lot of money.

Several Nigerians took to social media to express their disappointment and frustration with INEC, pointing out that the commission had four years to organise for the election, and waited until citizens had travelled and committed the day to voting, before announcing the poll delay.

“Following a careful review of the implementation of this logistics and operational plan and the determination to conduct free, fair and credible elections the commission came to the conclusion that proceeding with the election as scheduled is no longer feasible,” INEC chairman Mahmood Yakubu told journalists.

Breaking News: The #NigeriaDecides2019 Elections now to hold on; 23rd February, 2019 for Presidential and National Assembly while the Governorship, State House of Assembly and the FCT Area Council Elections is to hold on 9th March, 2019. pic.twitter.com/6zhvBLQe2a

Presidential elections in 2011 and 2015 were also delayed over logistics and security issues.

Nigeria is also dealing with pockets of instability and past elections have been marred by violence, intimidation and ballot rigging. Authorities had bolstered security in much of the country.

Dozens of policemen and other security forces were deployed from police headquarters in Maiduguri, the capital of northeast Borno state that has been worst hit by the Boko Haram militant group and its offshoot, Islamic State in West Africa Province.

The president’s spokesman said INEC was expected to hold a meeting at 2pm local time (1300 GMT).