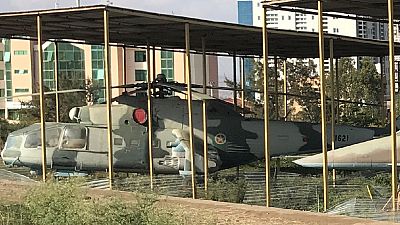 Multiple media outlets in the country reported over the weekend that the Ethiopia National Defense Force, ENDF, had commenced aerial bombardments of areas occupied by the Oromo Liberation Front’s armed group.

According to FBC, the bureau said the reports were false social media posts meant to mislead people at a time the government was doing everything to maintain rule of law in the region.

The bureau said the issues bedeviling the region is not serious to warrant airstrikes as had widely been reported. They admitted however that bank robberies in the region continued to spike.

FBC said the bureau admitted that 18 state and private banks had been robbed in three zones in the region amongst them the Commercial Bank of Ethiopia, CBE; the Cooperative Bank of Oromia and the region’s Credit and Savings outfit, OCSSCO.

The attacks it added were carried out by armed men who had caused damage to public and private facilities as well as engaged in actions that disrupted public peace. The government was working to bring perpetrators to justice it added.

The ruling party in the region is the Oromo Democratic Party, ODP, led by Prime Minister Abiy Ahmed but the regional president is ODP’s deputy chair Lemma Megerssa.

Oromos, the country’s most populous ethnic group were the force behind anti-government protests that forced executive change in April 2018.