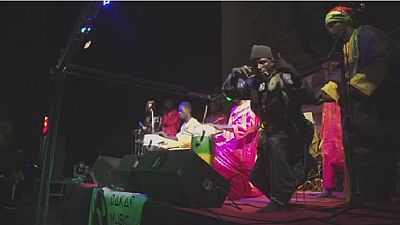 The second edition of the Dakar Music Festival kicked off last week in the Senegalese capital.

The festival brought together international and local artists from various backgrounds and different genres of music, in what organisers hope will revive the local music scene amongst young people.

It's a very beautiful initiative. It's a meeting between different music genres, and that's a nice discovery.

Having earned the “Senegalese James Brown” title from music critics, lead singer of Sahad and the Nataal Patchwork band, Sahaad Saar, says he is ready to take Senegalese music to another level.
SAYING:

“In the years before, yes Senegal was the leading country (for music). But now, 20 years later, Senegal is no longer number one in Africa. Today we’re talking about Nigeria, Mali first. We’re talking about DR Congo before talking about our country. Because people here are just focused on local music, the Mbalax music of our country. That’s a fact. If we only make the music that is there, then we cannot open ourselves to other things. And naturally, music in the international scene varies, that also plays a role, “ Sahad Saar said.

Organizer of the Dakar Music Festival, Sophien Arrar said their theme is a reflection of the African culture.