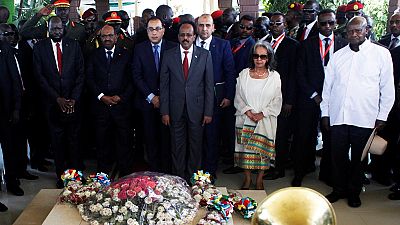 Leaders from around the East Africa subregion ‘descended’ on the South Sudanese capital, Juba, to join the peace day celebrations.

Each of the the leaders presented a message to the government and people of South Sudan, stressing the need to maintain and work to protect the September 12 peace deal signed in Addis Ababa.

South Sudanese rebel leader and former first vice-president, Riek Machar, earlier returned to the country for the first time since 2016. He arrived in the capital, Juba, on Wednesday to join the event.

In #Juba, Speeches and Celebrations of prevailing Peace in #SouthSudan continue to flow through the air and throughout the nation – A Bright and Unified future is on the horizon for the country. UNPeacekeeping UNOAU_ RadioMiraya pic.twitter.com/dEmP8iwK68

The former Vice President had fled to neighbouring Democratic Republic of Congo in 2016 under a hail of gunfire when an earlier peace deal collapsed.

Machar and President Salva Kiir signed a new peace agreement last month in the latest attempt to end the five-year war which has claimed thousands of lives.

In a letter to President Salva Kiir earlier this week, Machar demanded to take charge of his security upon return to the youngest African nation.