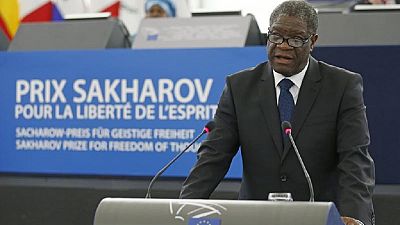 A week ago, October 5, the Norwegian Nobel Committee announced winners of the Nobel Peace Prize for 2018. DR Congo’s Denis Mukwege and Nadia Murad were named joint-winners.

The two had been awarded for their efforts to end the use of sexual violence as a weapon of war and armed conflict, the organizers said.

Mukwege became only the eleventh African to be named. We share 10 top facts about the man who is no stranger to awards in the course of his work but also one who dedicated his award to women back home.

1. Dr. Denis Mukwege is the founder of the Panzi Hospital in the South Kivu province of the Democratic Republic of Congo. 2. He had previously been nominated three time for the Nobel Peace Prize for his service and fight against sexual violence. 3. His hospital has treated over 46,000 girls and women with gynecological injuries, about half of them, victims of sexual violence. 4. He narrowly escaped an assassination attempt in 2012 that claimed the life of his guard who took the bullet in his place. 5. Dr. Mukwege went into exile in Europe but later returned to a rousing welcome the following year to help his struggling hospital to stay open. 6. He has previously been named one of the 100 most influential people by the TIME magazine. 7. The life of the “rape surgeon”, as he is popular called, has been documented in the film, “The Man Who Mends Women”, and a book. 8. Mukwege has been very vocal in the DRC where he called for a change in the country’s governance system. Kinshasa, however, congratulated him on the feat. 9. Dr. Mukwege has received scores of honours including Europe’s top human rights prize – Sakharov Prize given by the European Parliament. 10. He was performing surgery at the time the news of his award reached him. Aside his surgery, he is well renowned rape advocate in DRC.

In an interview with the prize committee hours after he was named along with Iraqi Nadia Murad, a surprised Mukwege said: “I need a little bit (more) time to really be able to talk. But it was so touching when I was operating and I heard people start to cry, and it was so, so touching… on file, my program is to operate this morning.

“… I start (ed) my program, and it was good because I was just at the end of the second operation, when suddenly people started just to cry and make noise … and I can see in the eyes of many how they are happy to be recognized,” he added.