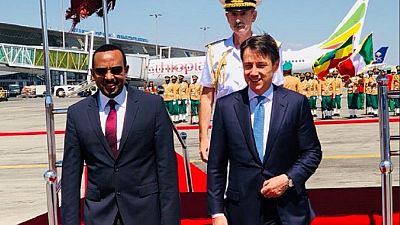 Ethiopia’s prime minister Abiy Ahmed has welcomed his counterpart from Italy, who is in Addis Ababa for a two-day working visit that will among others offer support to the peace deal signed with Eritrea.

Giuseppe Conte, who was received at the Bole International Airport by Abiy, is also expected to travel to Eritrea and meet president Isaias Afwerki.

The leaders are expected to discuss and sign bilateral agreements that promote their respective nations’ interests.

The Ethiopian and Eritrean leaders signed a “joint declaration of peace and friendship” on July 9, normalizing ties between the longtime foes who waged war against each other between 1998 and 2000.

READ MORE: Details of the Eritrea – Ethiopia accord signed in Jeddah

The peace deal has been applauded by several allies of Ethiopia including the African Union and the United Nations, who have since urged other conflicting nations to adopt a similar model.