Eritrea - Ethiopia accord signed in Jeddah: Here are the details 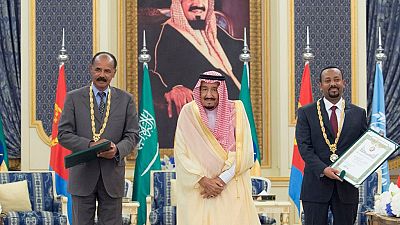 Leaders of Eritrea and Ethiopia met in Saudi Arabian city of Jeddah where they signed a peace accord premised on the July 9 deal signed in Asmara.

The Jeddah accord was witnessed by the King of Saudi, Salman Bin Abdul Aziz and the United Nations Secretary-General, Antonio Guterres. The U.N. chief described it as “historic” and key to regional security.

Agreement on Peace, Friendship and Comprehensive Cooperation Between the Federal Democratic Republic of Ethiopia and the State of Eritrea.

The Federal Democratic Republic of Ethiopia and the State of Eritrea, hereinafter referred to as the Two Parties;

Considering the close bonds of geography, history, culture and religion between the two countries and their peoples;

Desiring to achieve lasting peace and cement their historical ties to achieve their lofty objectives;

Determined to establish comprehensive cooperation on the basis of complementarity and synergy;

Determined further to contribute actively to regional and global peace and security;

Reaffirming the Joint Declaration on Peace and Friendship that they signed on July 9, 2018 in Asmara;

Reiterating their commitment to the principles and purposes of the Charter of the United Nations;

The Two Parties agree as follows;-

The state of war between the two countries has ended and a new era of peace, friendship and comprehensive cooperation has started.

The two countries will promote comprehensive cooperation in the political, security, defense, economic, trade, investment, cultural and social fields on the basis of complementarity and synergy.

The two countries will develop Joint Investment Projects, including the establishment of Joint Special Economic Zones.

The two countries will implement the Eritrea-Ethiopia Boundary Commission decision.

The two countries will promote regional and global peace, security and cooperation.

The two countries will combat terrorism as well as trafficking in people, arms and drugs in accordance with international covenants and conventions.

The two countries will establish a High-Level Joint Committee, as well as Sub-committees as required, to guide and oversee the implementation of this Agreement.

This Agreement is made at Jeddah, Kingdom of Saudi Arabia on this day of September 16, 2018 in two original copies in Amharic, Tigrinya, Arabic and English languages; in case of discrepancy in interpretation, the English version shall prevail.

For: The State of Eritrea
Isaias Afwerki
President