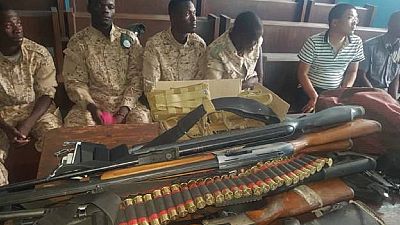 Authorities in Kenya and Zambia have under a week arrested Chinese nationals deemed as being threats to their respective national security.

It started off over last weekend in Zambia where police reported the arrest of two Chinese over allegations that they were giving illegal military training to members of a local security firm.

Police said the two were picked up in Livingstone, the tourist capital. A number of Zambians were also arrested as part of the operation. Police also confiscated shotguns, a pistol and ammunition.

#MorningAddiction Police in Zambia arrested two Chinese nationals over the weekend over allegations that they were giving illegal military training to members of a local security firm.#AroundTheWorld pic.twitter.com/eS0fTaOTWq

On Friday, October 5, Kenya Immigration reported the arrest of five Chinese nationals with items believed to be a threat to national security.

The group – which included a woman – are to be held in detention as investigations into their operations continue. The arrest took place at the Lavington area in the capital, Nairobi.

‘Items recovered are, Radio Calls, Military uniforms, laptops metal detectors and many others. They will be detained for sometime as the investigating agencies do further investigations,’ Immigration Kenya said in a tweet.

BREAKING!
5 Chinese nationals arrested in Lavington with a number of items recovered that are believed to be a threat to our National Security. More info coming up shortly. #AskImmigrationKE cc. InteriorKE FredMatiangi GKihalangwa pic.twitter.com/92DKM4uVIE

Kenya has in the last few weeks had cause to deport and arrest a number of Chinese engaging in illegal activity in the country.

A Chinese businessman was deported over a racist rant in which he referred to all Kenyans including the president as ‘monkeys.’

Then there was a cause to arrest and deport a dozen Chinese nationals who were involved in prostitution.