Health workers trying to control the Ebola outbreak in the city of Beni, in eastern Democratic Republic of Congo (DRC), have met resistance and hostility from residents who refuse to accept their city has been hit by the virus.

Yet the Health Ministry has identified Beni as the new flashpoint and two people who died in Butembo, just over 50 km from Beni and an important trading hub, have been confirmed Ebola cases.

The Ebola death in Butembo, a city of almost a million on the border with Uganda, dampened hopes that the spread of the disease was close to being brought under control. Butembo straddles a major trading route for consumer goods entering Congo from East Africa and for Congolese exports of artisanal gold, coltan, timber and other materials to East African ports via Uganda.

Taxi drivers plying the Beni-Butembo route have a different opinion about the epidemic, claiming they would have been the ones to have been infected as they always meet and mix with both Beni and Butembo residents.

“We hear people talking about Ebola but we have never seen anyone suffering from it. I am a resident of Beni and I don’t think there is Ebola”, said Moses Tekela, a taxi driver.

Some areas close to the epicentre of the outbreak, which is believed to have killed 89 people since July and infected another 40, have been off-limits to health workers due to their proximity to rebel-controlled territory. Most have been in villages but about 20 cases have been in Beni, a city of several hundred thousand people with close links to Uganda.

Unlike the taxi drivers, teachers in Beni fear the worst and many have stayed away from schools due to start after the summer break this week. Parental concern over possible infection also has stopped some pupils from attending classes at the start of the school year.

The health ministry has advised those in high-risk areas to observe strict hygiene rules such as washing their hands before entering supermarkets, schools and other public places.

Health officials say they have made progress slowing the virus’s spread with experimental vaccines and treatments. But they cannot be sure the situation is under control due to difficulties accessing some areas.

Congo has experienced 10 outbreaks of Ebola since it was discovered in the country’s forested north in 1976. The disease causes haemorrhagic fever and kills about half of the people it infects. 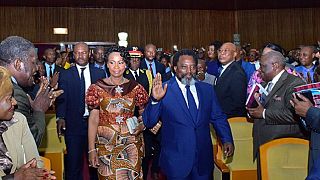