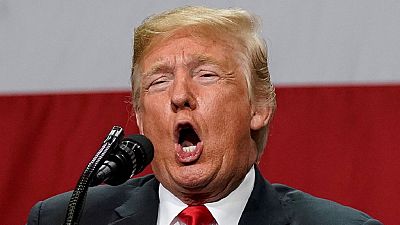 South Africa’s main opposition parties have lashed out at United States president Donald Trump over his comments on the land expropriation in the country.

The Democratic Alliance (DA) and Economic Freedom Fighters (EFF) have thus joined government in asking Trump to stay out of the country’s domestic affairs.

Leader of the DA, Mmusi Maimane, in a veiled jab referred to Trump as a fear monger whiled the EFF’s Julius Malema called him a pathological liar who they were not scared of.

Be that as it may, we must put it on record, unequivocally, that Donald “the pathological liar” Trump, we are not scared of you and your USA or Western imperialist forces.

“The injustices of land dispossession in SA can be addressed by our Constitution in its current form. We must ensure ownership of land 4 all SAn’s (South Africans). Fear mongering by international leaders adds no value to this important debate,” Maimane said in a tweet. His party’s official account has since retweeted that position.

On their part, the EFF had more scathing views on the U.S. president, its leader at a press conference at the party headquarters took time to caution Trump and other western governments to stay off local politics – especially the land debate.

“Furthermore, we want to send a strong message to the USA authorities, just like we did to the Australian authorities, stay out of South Africa’s domestic affairs.

“South Africa is a post-colonial country ceased with deep racial inequalities that were long designed by apartheid and colonisation. Our land expropriation program seeks to realise the ideal of equality and human dignity.

“Through land expropriation we are forcing white people to share the land which was gained through a crime against the humanity of black and African people.

“Be that as it may, we must put it on record, unequivocally, that Donald “the pathological liar” Trump, we are not scared of you and your USA or Western imperialist forces.

“We are not the generation that is going to kneel at the statue of Western imperialism and accept to live in the indignity of black landlessness,” Malema stressed.

Trump said he Thursday that he had asked Secretary of State Mike Pompeo to look into “farm seizures” and the “large scale killing of farmers”.

South Africa’s government responded to the tweet branding it a “narrow perception which only seeks to divide our nation and reminds us of our colonial past.”

Meanwhile, Foreign Minister Lindiwe Sisulu is set to meet officials from the US embassy in Pretoria in the wake of the tweet from Trump. In a statement, Ms Sisulu described the comments as “unfortunate” adding that “it is regrettable that the tweet is based on false information”.