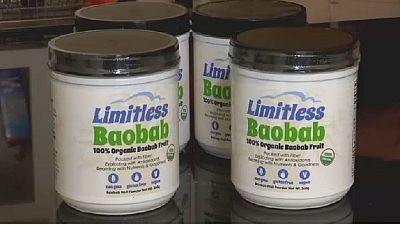 Taerou Dieuhiou has been climbing barefoot up baobab trees in Senegal’s southern Casamance region to collect their oblong fruit since he was 15. He uses a long pole to dislodge the fruit from the outer branches.

Until recently, baobabs were only tapped for local use but in a major business shift, a small network of producers and suppliers has pushed the fruit’s profile abroad.

Inside the hard, green shell that dangles from the spindly branches of Africa’s most iconic tree is a citrussy pulp that has become a popular “superfood” in the United States and Europe.

People still struggle to recognise the Baobab, often people think its cocoa, but they come and have a look, they taste it, they come to discover the fruit and through communication we manage to get them more and more interested

Coca-Cola’s Innocent, U.K. yogurt maker Yeo Valley and U.S. wholesaler Costco are among the major brands to sell baobab products. The transformation has started to bring in much needed revenue to African farmers.

Through a cooperative called GIE, Baobab des Saveurs, a small company with buyers in Australia and Canada pays Dieuhiou up to 10,000 CFA francs ($18) per sack, more than double what he received from local middlemen a few years ago.

While growing demand has increased farmers’ winnings, it has raised worries about sustainability, particularly in sub Saharan Africa where some experts say climate change has impacted crop development.

Experts have also questioned whether a global market for baobab can be sustained. Unlike coffee or cocoa found in abundance in Africa, baobab is not a plantation crop. There is also evidence that those trees are under threat.