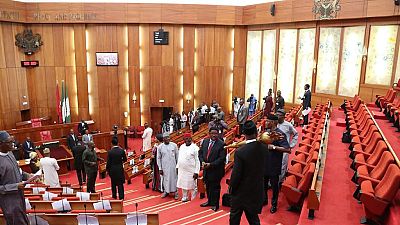 A total of fifteen lawmakers on the ticket of the ruling All Progressives Congress (APC) have officially defected to the main opposition Peoples Democratic Party (PDP).

The move which comes ahead of general elections in 2019 means that the APC is currently the minority in the Senate – the country’s upper chamber of parliament.

It also deepens a rift within the APC which situation led to a faction breaking away to form the Reformed – All Progressives Congress (R-APC). The faction has since held talks to team up with the PDP.

According to current figures following the defection, the PDP has 54 senators as against the APC’s 49. The remaining senatorial seats are shared by two parties, each with two. There are two vacant seats with an unaffiliated senator.