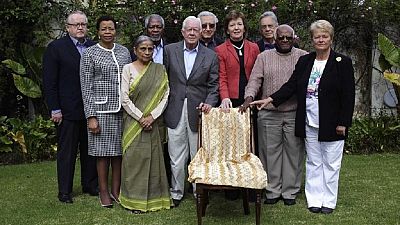 Former United Nations Secretary-General, Kofi Annan along with a team from ‘The Elders’ begin a three-day trip to Zimbabwe to engage political stakeholders ahead of general elections slated for later this month.

During the July 19 – 21 trip, the delegation is expected among others to meet political leaders, the Zimbabwe Electoral Commission, the diplomatic community, civil society representatives and media.

The Elders, with the support of the Kofi Annan Foundation, will visit Zimbabwe from 19-21 July to meet political leaders and support all actors working for free, fair and transparent elections, an inclusive transition and a brighter future for the country.

“Kofi Annan, Chair of The Elders and the Kofi Annan Foundation and Nobel Peace Prize Laureate, will lead the delegation.

“He will be joined by Mary Robinson, former President of Ireland and UN High Commissioner for Human Rights, and Lakhdar Brahimi, former Foreign Minister of Algeria and UN diplomat,” the statement added.

It is the first time in over three decades that Mugabe will not be on the ballot paper. The nonagenarian was deposed in what has been described as a military-led coup d’etat last November.

He was forced to resign at a time the ruling Zanu-PF had replaced him as leader of the party and its bloc in parliament had instituted impeachment processes against him. His sacked and exiled deputy Mnangagwa returned from South Africa to take Mugabe’s post in the party and in government.

The group was founded in 2007 by iconic anti-Apartheid leader and former South African President Nelson Mandela, they represent an independent voice, not bound by the interests of any nation, government or institution.

It is currently Chaired by Kofi Annan, with Gro Harlem Brundtland, the first woman Prime Minister of Norway as Deputy Chair of The Elders, other distinguished members include Archbishop Desmond Tutu, Jimmy Carter, Lakhdar Brahimi, Ban ki-Moon, Mary Robinson, Graça Machel amongst others.