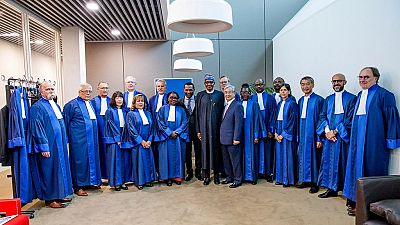 Nigerian president Muhammadu Buhari has reiterated the importance of the International Criminal Court (ICC), stressing that his country will continue to cooperate with the body.

Buhari said the ICC was a key judicial organ that continued to play a vital role in addressing injustices visited on innocent people across the world.

In his initial comments to the ICC whiles delivering a speech on the 20th anniversary celebration of the court, Buhari stressed: “I am honoured to be with you here today to celebrate the anniversary of this vital global institution. I say “vital” because the world needs the ICC.

If properly articulated, communication and awareness raising would surely engender trust and encourage greater cooperation of Member States with the Court and even encourage non – Member States to decide to become Members. It must avoid even a hint of bias or political motivations.

“As we know, the International Criminal Court was established twenty years ago as a global court, inspired by the Nuremberg trials of World War II war criminals, to hold people accountable for crimes against humanity, war crimes, crimes of genocide and aggression.

​“In addition to preventing impunity, promoting adherence and respect for the rule of law and fundamental freedoms worldwide and to punishing those in leadership positions responsible for the most appalling crimes and atrocities, the ICC has given hope for justice to so many, by demanding strict adherence to the rules of international humanitarian law.”

The leader of Africa’s most populous nation called on other nations that were not signatories to the Rome Statute to sign up in order to make the court one that had global reach. According to him, one of the ICC’s challenges was its limited scope.

Challenges of the ICC

Touching on the subject of ICC’s challenges, Buhari said the Hague-based outfit had excelled in the area of dealing with accusations of bias and political targeting but added that it had to do more to further cement its impartiality.

“The twenty years of the Court’s existence have witnessed several challenges, some of which had threatened the very existence of the Court itself.

“Most notable were the withdrawals and threats of withdrawals of membership of the Court by some States, as well as accusations of bias in the exercise of the jurisdiction of the Court. Thankfully, the Court has addressed these challenges in a dignified and commendable way.

​“Nonetheless, the Court needs to take on board all constructive criticisms and allay lingering fears and concern through targeted messaging, awareness raising and possible modification of some legal provisions.

“If properly articulated, communication and awareness raising would surely engender trust and encourage greater cooperation of Member States with the Court and even encourage non – Member States to decide to become Members. It must avoid even a hint of bias or political motivations,” he said.

The Hague-based International Criminal Court (ICC) was established by a Rome Statute adopted in 1998 to prosecute international crimes, including genocide, crimes against humanity, and war crimes committed within the territory of signatories and nationals of signatory countries. It came into force on July 1, 2002.

In the 20-year history of the ICC, almost all of its cases under investigation or prosecution involve Africans, as many of them were referred to the court by signatory countries.