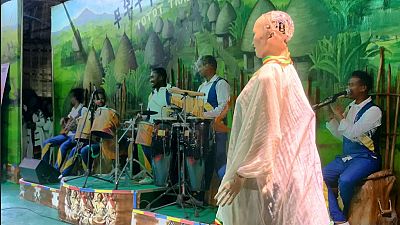 Sophia the robot has decribed Ethiopia as a special country, and its youth as world class talent following her visit to the country that is home to some of her programmers at I Cog Labs.

Sophia, who has her own Twitter account, shared some of the ‘beautiful moments’ from her trip, thanking all who came to see her at the expon where she was elegantly dressed in Ethiopian attire.

One of our contribution is that we built what you see the emotional activities, expression and also an engine called cognitive engine.

Some more beautiful moments from #Ethiopia! I quickly learned that it is a very special country. Thanks again to PM #AbiyAhmed for meeting with me and to all who came to see me. #AI #Sophiastravels pic.twitter.com/FGc7XF5vHm

I loved meeting some of the world class talent of #Ethiopia – including the team at iCog_Labs! https://t.co/vj4htkHmVK

I-cog Labs, an Ethiopian AI-focused company that had been involved in the development of Sophia’s software parts, facilitated the meeting between Sophia and young Ethiopians.

Getnet Aseffa, I-cog Labs CEO says his company has been working in partnership with Hanson Robotics for the past four years, during which they were able to contribute to the development of the brain parts of Sophia.

“One of our contribution is that we built what you see the emotional activities, expression and also an engine called cognitive engine,” Aseffa told Chinese news agency Xinhua.

I-cog Labs also programmed Sophia to speak Amharic, Ethiopia’s official language, which would be the first language she speaks other than her ‘native’ English.

Getnet says his team’s role in the development of the world’s most advanced and ‘realest’ robot has inspired young Ethiopians into the AI sector.

“They (the children) have started thinking that we are not locked in Ethiopia and we can have a big impact in the world,” he added.

In his meeting with Sophia on Monday, Abiy pledged to increase government support towards nurturing an innovation eco-system.