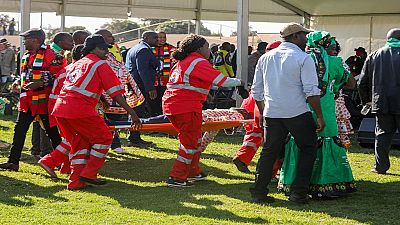 Zimbabwean President Emmerson Mnangagwa has reportedly revealed that one of his deputies, Kembo Mohadi is in South Africa for medical treatment following a bombing incident in Bulawayo last Saturday, according to the state-owned Herald newspaper.

Mnangagwa said Mohadi was seriously injured and had to be airlifted to South Africa, where he is now recovering.

Muchinguri-Kashiri, who is also Zimbabwe’s Environment, Water and Climate Minister, was operated on as shrapnel reportedly pierced through her chest. She is understood to be recovering as well.

Mnangagwa, a former Mugabe loyalist installed after the army ousted his erstwhile patron, said the object had “exploded a few inches away from me, but it is not my time.”

The blast came as Zimbabwe prepared to hold its first post-Mugabe presidential election on July 30, with 75-year-old Mnangagwa and 40-year-old Nelson Chamisa, the leader of the opposition Movement for Democratic Change, the main contenders.

Authorities gave no details of what had caused the explosion at Mnangagwa’s first rally in Bulawayo, an opposition stronghold where the ruling ZANU-PF has not won in national elections since 2000.