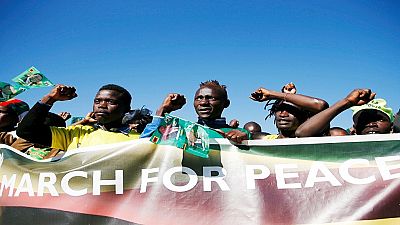 Mnangagwa, who came to power after a de facto coup in November that forced out Robert Mugabe, hopes international observers monitoring the vote for the first time since 2002 will recognise the elections as free and fair and end Zimbabwe’s isolation by Western powers.

The European Union and United States imposed sanctions on Mugabe and his inner circle, including Mnangagwa in 2002, after accusing them of vote rigging and unleashing violence against opponents. The EU later removed the sanctions.

The vote will be a litmus test of Mnangagwa’s democratic credentials and will be crucial to unlocking badly needed financial assistance.

However, he and Nelson Chamisa, leader of the main opposition Movement for Democratic Change (MDC) were absent from the pledging ceremony, potentially limiting its impact.

Until Saturday’s explosion at the Bulawayo rally, the run-up to the July 30 presidential and parliamentary poll has been free of violence. Two people died from their wounds.

Mnangagwa was not injured but on Tuesday described those behind the attack as “merchants of terror”, adding his government was already taking “comprehensive step and measures to ensure that peace endures”. He did not elaborate.

Hundreds have been killed and injured in the past, including by torture, murder and abductions that the opposition and rights groups say have mostly targeted opposition supporters and been carried out by ruling party members and state security agencies.

State agencies deny this. Investigations ordered by courts have yielded nothing.

Despite the absence of the two main figures, 17 political leaders and parties signed the peace pledge in the capital. Obert Mpofu, ZANU-PF secretary for administration, represented Mnangagwa.

He said the pledge “reflects political maturity and as ZANU-PF we will also commit ourselves in ensuring that this message of peace will cascade through all our party structures”.

Thousands of MDC supporters marched in Harare last month to demand electoral reforms and accused Mnangagwa’s government of deploying soldiers in the countryside to intimidate voters and campaign for ZANU-PF, a charge denied by the military and the ruling party. [nL5N1T74GE]

The opposition also accuses traditional chiefs, who hold great sway among their rural subjects, of breaching the constitution by openly campaigning for ZANU-PF.

A High Court this month ordered the head of the Chiefs’ Council to publicly retract his support for Mnangagwa.

“As a party we want to experience peace, which we have not experienced for so long,” said Morgan Komichi, MDC national chairman, who stood in for Chamisa.

Mugabe has said he felt betrayed by Mnangagwa, a former protege, and has called his presidency illegal.