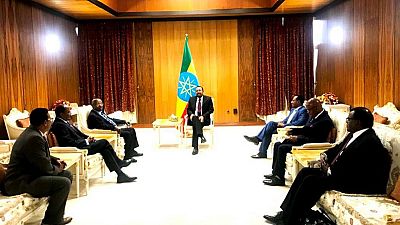 ODF had confirmed in a May 13, 2018 statement that it had reached an agreement with the government after talks at an undisclosed location to return to the country to partake in the democratic process.

The ODF leaders, led by Lencho Leta, Chairman of the Front, arrived in Addis Ababa, Ethiopia on Wednesday.

Upon arrival at the Bole International Airport in Addis Ababa, Leta told journalist that the outcome of the talks would inform ODF’s participation in Ethiopia’s politics.

‘‘Based on conditions and how our talks with the government of Ethiopia turn out, ODF will decide to operate as a legal political party on its own or by forming alliances with other political parties,’‘ Leta is quoted to have said.

State broadcaster, Fana BC reported that both parties have agreed to work together to foster Ethiopia’s national unity and deepen the democratic process.

Leta added that his party agreed to return home after being encouraged by ongoing democratic reforms. He also called upon other political parties based in the diaspora to return to the country.

The ruling party has since the beginning of this year released political prisoners, changed leadership from Hailemariam Desalegn and closed the notorious Maekelawi prsion.

The new premier who took office on April 2 has since toured several regions of the country and met with opposition leaders, pledging reform and steer the country away from destructive politics of intimidation and repression of dissenting voices.