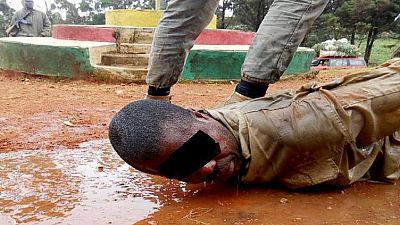 The Cameroon army has admitted that some of its officials had meted out inhumane treatment to a suspected separatist arrested in the NorthWest region of the country.

According to the Defense Minister Joseph Beti Assomo, speaking on state radio, gendarmes deployed to the restive region to fight separatists had “mistreated and tied up” an alleged separatist leader during his arrest Saturday.

A viral social media video showed officials having tied the suspects hands behind him. The suspect who was lying on his belly in muddy conditions is kicked and his head is stamped upon by some of the gendarmes and a police.

The gendarmes (paramilitary officials) are “clearly out of the norms and legal techniques in such circumstances,” the minister acknowledged, his condemnation followed a very strong online protest to the video.

It is the first time the army has acknowledged abuses committed by security forces deployed in the two English-speaking regions riled by separatist violence since October 2017.

“An investigation has been opened to identify (and) where appropriate sanction the perpetrators of these acts contrary to respect for human rights,” said the minister.

Nicknamed “general”, the abused person is an alleged separatist leader who was arrested on Saturday, said Beti Assomo. The said general according to authorities “was actively sought for several weeks for his involvement in acts of violence against the population and (in) the killing of the personnel of defense and security forces”.

Security forces have been repeatedly accused by NGOs and witnesses of abuses and burning houses. “We only burn houses where we discover weapons,” the army defended its actions in late April.

The central African regions English speaking regions have been mired in a security crisis that has been tagged the “Anglophone crisis”. In the two regions, northwest and south-west, fighting has become almost daily between the Cameroonian security forces and armed men.

The armed groups say they are fighting to establish an independent Ambazonia Republic. According to the International Crisis Group (ICG), “at least 120” civilians and “at least 43” members of the security forces have been killed since late 2016. The separatist record is unknown.