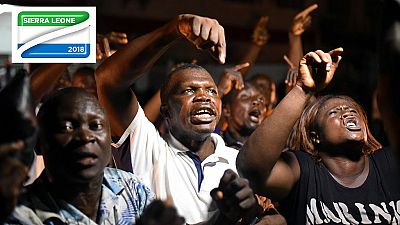 This is the concluding part of our recap of the just ended general elections in Sierra Leone. It looks at the court injunction that led to a postponement of the polls.

Court injunction and postponement of runoff

With days to the runoff, a court injuction was slapped on the process. A lawyer allied to the APC got a March 24 order from a High Court ordering NEC to hold on to preparations for the vote until a substantive case was heard.

The NEC Chair did a back and forth on the ruling. Initially Mohamed N’fah-Alie Conteh said the body will go ahead with the process. He backtracked hours later that they were suspending preparations till the case is heard.

Come Monday March 26, two court issues played out. The High Court set aside the injunction allowing the vote to go ahead the next day. NEC also went to court to get an extension of the voting date.

The Supreme Court accepted NEC’s argument that the injunction had impacted their preparations. They were given a four-day extension meaning the runoff was due to take place on Saturday March 31.

As was the case on March 7, voters went back to the polls to elect the next president of the country. It was a relatively peaceful process except for pockets of violence in parts of the country especially in respective strongholds.

A day after the end of polls, tensions began to rise as the parties disagreed on the process of results tabulation. The standoff led to the signing of an pact known as the Bintumani Agreement.

The deal streamlined the process of entering results into NEC’s database. The results were to be first entered into the NEC’s existing Tally 2018 system up to and including the archive stage.

With tensions running high amid heightened security in parts of the country, the army had cause to issue a statement dismissing reports by the SLPP that there was an active plan to assassinate their leader Julius Maada Bio.

Four days after the vote, NEC chair declared Maada Bio winner of the election despite calls by the APC for recounts in strongholds of the SLPP. In declaring the results, NEC chairman said the results represented 100% of polling stations across the country.

Below are a key figures from his declaration

He concluded thus: Therefore in exercise of the powers conferred on me as the National Returning Officer by sections 52(2) and 94(4) of the Public Elections Act, 2012 (Act No 4 of 2012), I hereby certify that Bio Julius Maada having polled 1,319,406 of the valid votes cast in the 31st March, 2018 presidential election run-off has been duly elected President of the Republic of Sierra Leone.

The declaration meant the job of NEC had ended. As by law required Maada Bio was sworn in by the Chief Justice at a hotel in the capital Freetown hours after the declaration. He has since assumed presidential duties from his private residence.

There is a joint transition panel in place to ensure a smooth handing over of affairs of the past government. A similar body is in place to deal with post election violence that rocked parts of the country.

Losing candidate Samura Kamara hinted of a court challenge shortly after the results were declared, Maada Bio called on him to drop the challenge and both have accepted mediation by the clergy according to our correspondent in Sierra Leone, Eric Kawa.