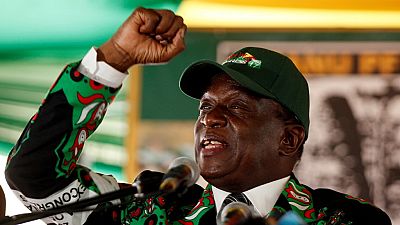 Zimbabwe’s President Emmerson Mnangagwa told members of his ruling ZANU-PF party that would have to start fixing the economy if they wanted a chance of winning next year’s vote.

Addressing delegates at the party’s first post-Mugabe congress, Mnangagwa was formally endorsed as party president and the presidential candidate for next year’s elections.

“We will only win at the ballot box if we can show signs that we are reviving our economy and at the same time we will only be able to make economic gains if we can secure re-election,” he said.

Zimbabwe’s economy collapsed in the latter half of Mugabe’s rule, especially after violent and chaotic seizures of thousands of white-owned commercial farms, that attracted crippling sanctions from Western allies.

Mnangagwa has called for the unconditional lifting of the political sanctions saying they ‘have crippled our national development’. He has also told members of the ruling party that elections might be held as early as March next year.

“Democracy bids that as a political party, ZANU-PF must always compete for office through pitting itself against opposition parties in elections which must be credible, free, fair and transparent,” Mnangagwa, 75, told the congress in downtown Harare.

In a sign of the military further consolidating its political power, Mnangagwa made three generals members of the party’s Russian-styled executive Politburo, the supreme decision-making organ of ZANU-PF.

Mnangagwa said he would name two deputies in a few days. Defence Forces Commander General Constantino Chiwenga is a strong contender for one of the vice presidency slots as a reward for spearheading the de facto coup that ended Mugabe’s rule.

Mnangagwa, whose sacking as vice-president set off the chain of events that led to Mugabe’s removal, said the ZANU-PF congress should define a new trajectory – which he did not spell out – and put behind it the victimization of members seen in the past.

The same congress formally expelled Grace Mugabe and members of her G-40 that were described as ‘criminals around the president’ during the de facto military coup last month.