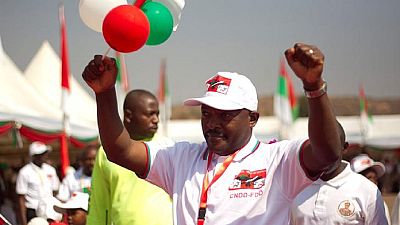 Burundi’s government has launched a fundraising drive for elections in 2020, presented as “voluntary” but condemned by rights groups as “organised robbery”.

The government adopted a plan in October to revise the Constitution that, if voted in by a referendum slated for early 2018, would allow Nkurunziza to serve another two seven-year terms from 2020.

At the launch of the contribution campaign on Monday, government called on the people of Burundi to “fulfil this highly patriotic duty”.

This is organised robbery. Contrary to what the government says, this contribution will be mandatory

“We are convinced that everyone will contribute,” Interior Minister Pascal Barandagiye said.

“If, by chance, there is someone who wants to make an exception, he can express it officially in writing,” he added.

The government suggested payments range from half a dollar for high school students, around double that for farmers, to monthly deductions from wage packets of civil servants.

For those in the private sector, the interior ministry will compile contributor lists from payment receipts.

Western electoral aid was cut in 2015, when Burundi was plunged into crisis as President Pierre Nkurunziza won a controversial third term.

Hundreds of people died in the ensuing turmoil with some estimates putting the deaths at up to 2000.

The fundraising campaign has been sharply criticised by critics of the government who have called it unconstitutional and rubbished the government’s claims that it is voluntary.

Gabriel Rufyiri, head of the anti-corruption board OLUCOME, who has been forced into exile by the crisis, said such fundraising orders are only constitutional for natural disasters.

“This is organised robbery,” he said. “Contrary to what the government says, this contribution will be mandatory.”

Activists say ordinary people will be forced to pay by the ruling party’s ferocious Imbonerakure youth wing, branded a militia by the United Nations