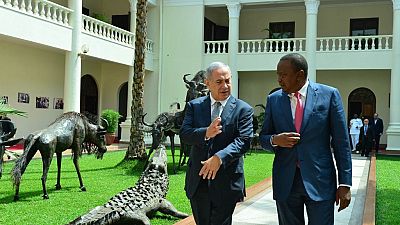 Israel prime minister Benjamin Netanyahu is expected to hold meetings with leaders of 10 African nations during a one-day visit to Kenya to attend the inauguration ceremony of President Uhuru Kenyatta.

The prime minister on Monday boasted of the strong ties he has forged with the African nations, and reminded lawmakers that this will be his third trip to the continent in the past year and a half.

His Office said that Netanyahu will attend an official lunch, where he will be joined by the leaders of Tanzania, Uganda, Zambia, Rwanda, Togo, Botswana, Namibia and Ethiopia, the vice-president of Nigeria and other senior officials. The prime minister is to give an address during the meal.

Afterwards, Netanyahu is to hold bilateral meetings with several of the heads of state.

The prime minister who has pushed for Israel to expand its diplomatic ties in Africa, held a similar round robin of talks with African leaders when he attended a summit in Liberia earlier this year.

In early July 2016, Netanyahu became the first Israeli premier in decades to travel to the continent when he visited four East African nations: Uganda, Kenya, Rwanda and Ethiopia.

Despite allegations of vote rigging, Netanyahu congratulated Kenyatta on his “landslide victory,” in a November 2 letter.

According to local media reports about 100,000 people are expected to attend Tuesday’s inauguration, some 60,000 inside the city’s Kasarani Stadium and the rest outside.

#KENYA #Israeli prime minister Benjamin #Netanyahu is set to be the only head of government from outside #Africa to attend the swearing-in ceremony of Kenya’s president-elect Uhuru Kenyetta tomorrow. pic.twitter.com/pgMNLm2lGT

Kenya’s opposition is planning to stage an “alternative inauguration,” as well as acts of civil disobedience, which observers say could spark riots, given the threat to respond to the oppositions plans with “equal force of the law,” made by a government spokesperson last week.