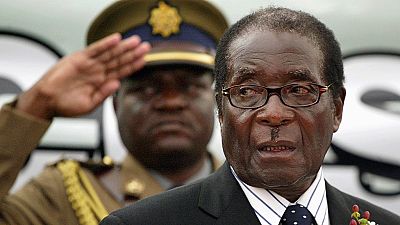 Zimbabwe’s former president, Robert Mugabe has been granted immunity from prosecution; sources close to the negotiations said on Thursday.

According to the source, Mugabe was assured of his safety in his home country as part of the deal leading to his resignation.

The world’s oldest ruler ruled Zimbabwe for close to four decades but stepped down on Tuesday after the army seized power and the ruling party turned against him.

For him it was very important that he be guaranteed security to stay in the country although that will not stop him from traveling abroad when he wants to or has to.

He led Zimbabwe from independence in 1980 but stepped down on Tuesday after the army seized power and the ruling party turned against him.

The former vice president, Emmerson Mnangagwa is set to be sworn in as president on Friday.

Meanwhile, a civil-society group based in South Africa, Global civil-society alliance (CIVICUS) in a statement signed by David Kode urged the Zimbabwe Defence Forces and all stakeholders in Zimbabwe to continue to exercise restraint and respect the rights and fundamental freedoms of all citizens during this period of political transition.

According to the group, the resignation of President Robert Mugabe marked an end to 37 years of brutal repression of fundamental rights and the lack of respect of the rule of law.

“We are excited as a nation at the prospects of the future. However, it is important that we remain vigilant especially on matters to do with human rights and democracy,” said Evan Mawarire, human rights defender in Zimbabwe.

CIVICUS calls on the military and all political actors to live up to Zimbabwe’s constitutional and international human rights obligations. While urging the Southern Africa Development Community (SADC) to promote meaningful dialogue for all concerned.

A government source said Mugabe, who is 93, told negotiators he wanted to die in Zimbabwe and had no plans to live in exile.

“For him it was very important that he be guaranteed security to stay in the country although that will not stop him from traveling abroad when he wants to or has to,” the source said.

Mugabe’s rapid downfall was triggered by a battle to succeed him that pitted Mnangagwa against Mugabe’s wife Grace.