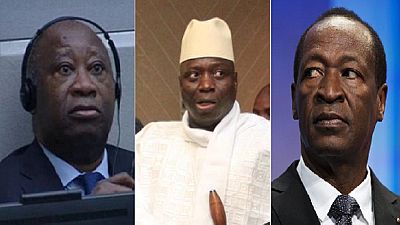 Following in our Africa presidents series, we take a look at leaders who have in recent times been forced out of office.

Of the ten presidents who died in office between 2008 and 2014, five of them had spent over 20 years in charge of their respective countries.

The narrative is changing across the continent except for much of the Central Africa region where leaders are holding on tight after decades. The democratic wave has seen power transitions in most countries be it from leaders within a party or from ruling party to opposition and back in some instances.

Exit on duty: African presidents who died in office [1] https://t.co/dw8p5oaNcg

Some African leaders have, however, literally been chased out of office either via armed conflict or by some amount of diplomatic pressure – as was the most recent case in The Gambia.

This article recounts instances of how some African leaders have been forced out of office for one reason or the other. West Africa leads the pack, Central and North Africa all feature.

End to Jammeh’s over two decades ‘bossing’ The Gambia

Until December 2016, Jammeh had been in charge of The Gambia for 22 year after taking power from the country’s first president, Dawda Jawara, in a bloodless coup in 1994.

The country has no presidential term cap and Jammeh was largely said to be on his way to a fourth consecutive poll victory. The shock came on December 2 when elections chief disclosed that Jammeh had accepted defeat to an opposition coalition candidate.

Between then and when he eventually left the country into exile in Equatorial Guinea in January 2016, the following major incidents occured: unsuccessful regional mediation, ECOWAS flew president-elect Adama Barrow to Senegal where he was sworn-in as president.

ECOWAS put together a military force to oust him at end of his tenure – got Security Council approval, Jammeh imposed state of emergency, Barrow took office in Dakar, finally Jammeh left after mediation by Guinea’s Alpha Conde and Mauritania’s Mohammed Ould Abdel Aziz.

How Burkinabe ‘coal’ burned out decades of Compaore rule

Blaise Compoare all things being equal would still have been president of Burkina Faso but for an uprising that toppled his regime in the year 2014. At the time his party had asked him to call for a referendum to scrap term limits ahead of 2015 polls.

Till date, some state actors at the time of his reign are before the courts for their involvement in the crackdown that killed protesters and injured several others. He took office in 1987 after Thomas Sankara was murdered. He had previously won polls in 1991, 1998 and 2005.

The landlocked country has returned to stability under democratically elected Roch Marc Kabore. The country, nevertheless, suffers from the effects of insurgency in the Sahel region which has seen it attacked by members of Al-Qaeda in the Islamic Maghreb.

Compaore, meanwhile, is exiled not too far away from home. He is in Ivory Coast, a development some political watchers say is a little risky. One thing is clear, he is unlikely to face prosecution.

To turn the Ivorian story on its head, the country’s former president is currently before the International Criminal Court (ICC) on charges of war crimes and crimes against humanity.

Question is: how did Laurent Gbagbo get himself in that mess? Like Jammeh, he lost an election in 2010 to incumbent Alassane Ouattara and refused to accept the verdict plunging the country into a civil war.

In the end, powerful rebel forces took the side of his opponent. Along with French forces, Gbagbo was arrested in 2011 along with his wife and other top aides. His wife is currently facing charges back home and Gbagbo battles it out in The Hague.