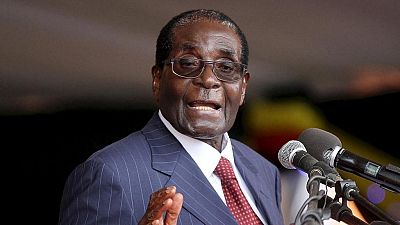 Zimbabwean president Robert Mugabe has made a case for the return of death sentence onto the law books.

Mugabe cited the increasing rate of murder cases in the southern Africa country as justification for a return of the law. He also expressed worry at how people killed others because of trivial and ritual purposes.

The 93-year-old was speaking at the funeral of a political ally, Don Muvuti, in the capital Harare on Wednesday. “Let’s restore the death penalty. People are playing with death by killing each other.

We want this country to be a peaceful and happy nation, not a country with people who kill each other.

“Is this why we liberated this country? We want this country to be a peaceful and happy nation, not a country with people who kill each other,” he added.

The AFP news agency reports that the last execution in the country happened 12 years ago after which the hangman retired. But a justice ministry official is said to have disclosed that that over 50 people have since applied for the vacant post of the executioner.

Reports indicate that the country currently has over 90 prisoners on death row. Rights groups have increasingly called for the death penalty to be scrapped from the law books across the world.

Most African countries only have them sitting on the books but hardly implement them. Nigeria’s Lagos State recently mooted death sentence for kidnappers after a spike in the crime.

In Tanzania, however, President Magufuli was quoted as saying even though it was on the books, he will not be in a position to sign death warrant of convicts.

“I know there are people who convicted of murder and waiting for death penalty, but please don’t bring the list to me for decision because I know how difficult it is to execute,” he said.