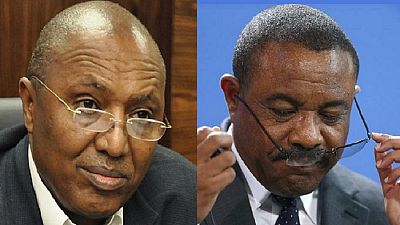 Another top advisor to Ethiopian Prime Minister, Hailemariam Desalegn, has resigned from his post.

Bereket Simon according to BBC Amharic submitted his resignation as the PM’s advisor in charge of Policy Studies and Research, leaving a post he has held for the past four years.

Local media reports indicate that Simon, a veteran politician has thus resigned from two top positions in just a week. Last week, he gave up his position as board chairman of the government-owned Commercial Bank of Ethiopia.

A member of the ruling Ethiopia Peoples Revolutionary Democratic Front (EPRDF), he has served the government in different capacities including as Minister of Communication.

The move comes weeks after two major political shifts around the Prime Minister. The Protocol Chief of the PM, Baye Tadesse Teferi, sought asylum in the United States for fear of political persecution.

The Speaker of the House of Representatives, Abadulla Gemeda, also resigned his post following ‘disrespect’ to members of his ethnic group and his party in the ruling coalition.

Baye Tadesse Teferi, was part of the Ethiopia’s official delegation to the United Nations General Assembly (UNGA) in New York weeks ago.

The Ethiopian delegation returned to Addis Ababa but he remained in the U.S. He confirmed to the Voice of America’s Amharic service that for political reasons he had opted to seek asylum in the United States.

The Protocol Chief of Prime Minister Hailemariam Desalegn thus quit a role he had served in for over two years. Ethiopia’s economic successes have long been eclipsed by what political and rights watchers call a systemic and institutionalized crackdown on media and political dissent.

The East African nation has been severally called upon to open their political space and to tolerate dissenting political views.