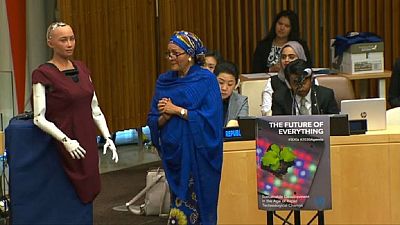 United Nations Deputy Secretary-General Amina Mohammed had an interaction with human-like robot Sophia during a joint meeting on artificial intelligence in New York.

Sophia was built a year and half ago by American company Hanson Robotics and is equipped with artificial intelligence technology which allows her to act and speak like a human as well as make facial expressions.

Amina Mohammed interacted with Sophia on Wednesday after delivering an opening speech to the UN’s Economic and Social Council (ECOSOC) meeting on the theme: “The Future of Everything – Sustainable Development in the Age of Rapid Technological Change”.

The influence of technology on our society should be determined by actions of humans and not by machines. The United Nations stands ready as a platform for discussions and mutual learning on this topic.

She told the experts from governments, academia, business and civil society that technology should be managed well to ensure artificial intelligence will be used for good and attain the SDGs.

“If technological progress is not managed well, it risks exacerbating existing inequalities. What will it take to make artificial intelligence a force for good? How can we ensure that no one is left behind in this age of rapid technological change?” she questioned.

“The influence of technology on our society should be determined by actions of humans and not by machines. The United Nations stands ready as a platform for discussions and mutual learning on this topic,” she added.

In her interaction with the popular artificial intelligent robot Sophia who has been a guest on television shows since last year, Amina Mohammed asked: What can you do better than a human?

“I am a social robot built by Hanson Robotics. I am a year and half old and I can see you, have a full conversations, make thousands of facial expressions and understand speech and meaning behind words, and I just got new hands … check this out [she flexes her fingers], but I’m still learning a lot…,” Sophia responded with a smile.

Ms Mohammed again asked: In many parts of the world, people dont have internet or electricity, what can we do at the UN to help them?

“William Gibson once said the future is here, it’s just not evenly distributed…” Watch the video below for the rest of Sophia’s answer.